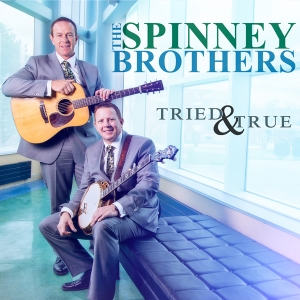 Their fresh new single, "Gonna Catch a Train," written by Ed Hamilton, released July 8th to great favor with radio, they received 2 IBMA Nominations for Emerging Artist & Song of the Year for the 2014 IBMA Awards and also performed on the IBMA Awards Show in Raleigh, NC in honor of fellow Canadian Neil Rosenberg, who was being inducted into the International Bluegrass Music Association's Hall of Fame.

When talking about TRIED AND TRUE's first single, Brian McNeal of Prescription Bluegrass says, "If one could improve upon the Spinney Brothers song "Gonna Catch A Train," I don't know how! It just may be the most bluegrass song the Canadian brothers have done yet and is certain proof that bluegrass as a genre knows no geographic boundaries."

DJ Amy Orlomoski with WHUS Radio's "Bluegrass Cafe" at The University of CT says, "By their own admission, these ambitious brothers are "living the dream" with chart-topping songs and sold out shows, and their ability to gain so many new fans wherever they play is amazing."

With a driving tempo and their signature southern-flavored bluegrass style, these brothers not only garnered back to back Emerging Artist of the Year nominations for 2013 and 2014, they also were nomninees for Song of the Year.

The songs showcase a pulsing momentum that is bound to get lovers of bluegrass music excited. Charlie Hall with WCYO's The Bluegrass Express says, "If you like traditional, hard driving Bluegrass music, you're going to love it!"

Comprised of Allan Spinney, Rick Spinney, Gary Dalrymple, and newest member Terry Poirier on bass, The Spinney Brothers are originally from the Annapolis Valley of Nova Scotia and debuted in 1992, showcasing a tight brother duet vocal style that was immediately recognized for its energetic and distinctive sound. The cornerstone of their musical identity is their complete understanding and love of traditional bluegrass music with a southern flair.


BIO:
From the Annapolis Valley of Nova Scotia, Canada, the Spinney Brothers are comprised of Allan Spinney , Rick Spinney, Gary Dalrymple and Terry Poirier.
Brothers Allan and Rick debuted their band in 1992, showcasing a tight brother duet vocal style that was immediately recognized for it’s energetic and distinctive sound.
The cornerstone of the Spinney Brothers musical identity is the sound of traditional, southern-flavoured bluegrass music. The first generation bluegrass legends have been an important musical influence, yet their music is equally shaped by their personal lives and local heritage. By incorporating original material, which draws from various sources, the Spinney Brothers effortlessly intertwine the past with the present.
The Spinney Brothers believe in freshness and excitement of traditional bluegrass music. Brother duet singing, backed by supportive and complimentary instrumentation, is the foundation of their tasteful and recognizable sound. Give a listen, and you are sure to be entertained.