Mister Rogers - Songs From The Neighborhood 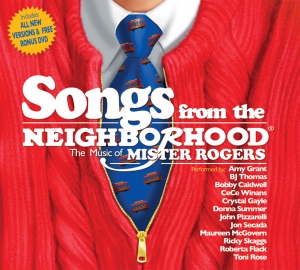 12 of the nation's most loved artists & great vocalists have come together with love to offer their unique interpretations of Mister Rogers most popular songs.

2006 Grammy WINNER as Best Children's Music Album (although the album crosses over to adults beautifully).

It all begins with a song. For producer/composer Dennis Scott. It began when he was watching Mister Rogers performing one of his songs on his PBS children's series. "I was taken by the engaging lyric and deceptively complex melody." Dennis was surprised to learn that Fred Rogers was the composer of all the songs on his program and that no major recording artist had ever covered his material. That set the wheels into motion for a two year labor of love.