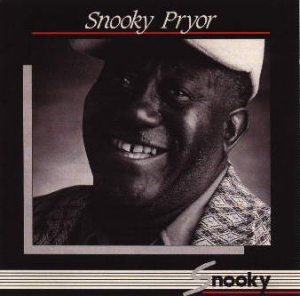 Snooky Pryor was a true pioneer of the postwar blues sound. Born in Lambert, Mississippi on September 15, 1921, James Edward Pryor took up the harp at the age of 14 despite the objections of his minister father, copping licks from old Sonny Boy Williamson 78's.

Stationed with the army outside Chicago in 1940, Snooky jammed on weekends with the likes of Sonny Boy and Homesick James and played on the Maxwell Street scene. 1945 saw his musical career begin in earnest. In 1948, he made his recording debut with "Telephone Blues" on the tiny Planet label, now considered one of the earliest postwar Chicago blues classics. He recorded intermittently throughout the '50s for J.O.B., Parrot, and VeeJay, and with his natural, swinging harp sound, was also highly in demand as a session musician, playing on sides with Sunnyland Slim, Floyd Jones, Homesick James, and others of the "Maxwell Street School". His other now venerated recordings include "Someone To Love Me", "Snooky and Moody's Boogie", and "Judgment Day".

An extremely devout and principled man, he became disillusioned with the music business and retired to downstate Illinois for most of the '60s and '70s to pursue carpentry, fishing, and to see after his large family. Finally, a series of successful European tours lured him back to performing regularly. With his children grown, Snooky found the time to write new material, and eight of those compositions are on Snooky, his first domestic album of material ever released. Snooky chose Sunnyland slim band members Robert Stroger on bass, Steve Freund on guitar, and Muddy Waters' band alumnus Willie "Big Eyes" Smith on drums. Released in 1987, the recording forced Snooky out of semi-retirement as the attention garnered from this release increased the demand for his personal appearances both here in the United States and abroad.

In the early 1950's, Snooky Pryor and Johnny Shines recorded sides for the J.O.B. label that helped lay the groundwork for Chicago's electrified, small band blues. Reunited four decades later in the Texas hill country, they took the opposite tack with a set of acoustic, country blues that returned them to their roots in the Mississippi delta. Robert Johnson, the proud, tormented genius of Delta blues, is the spirit hovering over Back To The Country. In the forty years since Snooky and Johnny first recorded together, blues has undergone unlikely transformations, growing first into white popular music, then disappearing almost entirely, before being revived several times. Back To The Country remains as close as you're likely to get to the source - the Delta one more time. Released by Blind Pig in 1991, the recording went on to win the Living Blues "Country Blues Record Of the Year" award among many other accolades.

Snooky's energy is undiminished and his sound on Shake My Hand is as vigorous as in his heyday when he recorded his great, jumping, finger-popping classics. Backed on Shake My Hand by a legendary ensemble which includes former Sunnyland Slim bass player Robert Stroger, former Mississippi Heat guitarist Billy Flynn and former Willie Dixon drummer Jimmy Tilman, Snooky's urgent vocals and strong, evocative harp capture the excitement of an earlier era. The unmistakable, streetwise, yet country-born sound of post war Chicago blues.

Postscript: Snooky Pryor passed away on October 18, 2006.
9
What's This
Advertisement