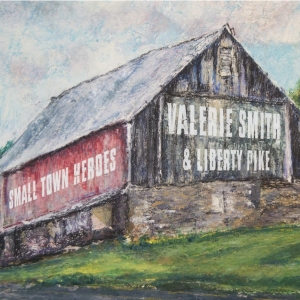 Video sampler available: https://www.youtube.com/watch?v=JplbkipTbM0 (or if you have up to date Adobe Flash, it is included at the end of the biography on this page).

Track 2: Something About A Train

Track 7: I Took Mama to the Opry

"Small Town Heroes" reflects small town America and the people who make our lives colorful and better. It also has a lyrical undertone of challenges that everyday people have to face each day (economic, family, and personal). The current band are talented musicians and vocalists who reflect that very ideology - they work every day and yet have a passion to play music whenever, wherever they can; that is what helped build bluegrass, traditional country and old-time music in today’s world.
The project also features the only 2-time inductee to the IBMA Hall of Fame, Tom Gray, including a song that he wrote and sings in honor of his legendary bass, “Bessie”.

People who are playing on the CD:
Valerie was influenced by the East Coast band “The Seldom Scene”. She admired their raw, soulful sound, energy and style of bluegrass. More than two years before the making of this project, Valerie travelled from Bell Buckle, Tennessee to Maryland to join with her new band (Joe Zauner, Wally Hughes, Lisa Kay Howard Hughes and original member of the Seldom Scene, Tom Gray). Not only did she develop a special, energetic, and soulful show over the 3 year study, but she began to find songs that fit the concept of everyday people, doing everyday things, but always making time for the love of music. It was on this foundation that Valerie Smith produced the project so that her vision would be as close to the sound as her concept.

Where was it recorded?
Rockville, MD (a nice central place for Wally and Lisa Hughes, who live in Virginia; Joe Zauner and Tom Gray, who live in Maryland). With the collaboration of Tom Mindte as engineer and his large amount of experience and love for the historic aspects of music, the journey began at Patuxent Studios.


MORE ABOUT VALERIE SMITH
“Her music has been received with widespread critical and popular acclaim in the world of bluegrass” –Joe Romano, Bluegrass Now
“Her recording and performance style has been described as ‘exuberant’ by John Hansen in the Brainerd Dispatch, in Brainerd, S.D.
Jeff Bahr of the American News said, "Watching Valerie Smith perform is like being a witness to a thermonuclear explosion.”
Valerie Smith has developed a unique style and sound that has rocked the bluegrass world for almost two decades with a string of national and international tours, critically acclaimed recordings, and Grammy, IBMA and Dove Award nominations. Val's vocals are impressive. She has a staggeringly expansive range and the ability to portray an amazing array of emotion. As NPR radio host Dave Higgs has noted, "She can be sassy, sultry, siren-like, sweet, smooth, soothing and smoldering---sometimes during the span of just one song!" Valerie Smith and her East Coast-based band, Liberty Pike featuring legendary Hall of Famer Tom Gray on bass, are consistent audience pleasers and skilled musicians. When Valerie walks onstage with her fabulous band, expect to be inspired, amused and thoroughly entertained.
Originally from Missouri and now based in Bell Buckle, Tennessee, a charming little historic town just southeast of Nashville, Valerie Smith is an award winning bluegrass and American roots artist and songwriter. Since 1998 Smith has made thousands of fans and friends with her music, on stages across the United States, as well as in Europe, Canada and the United Kingdom. Her band is named “Liberty Pike” after the road that connects Bell Buckle to Nashville.
When you list to Valerie’s unique voice, you can hear influences from bluegrass, blues, gospel music and even Broadway show tunes. Her personal background is just as interesting and varied. Valerie holds a Master’s degree in Music from the University of Missouri in Kansas City, and she taught music for seven years in her home state before marrying Craig Smith (another fine musician and songwriter) and moving to Nashville.
Her three years as an account executive for a marketing firm in Music City gave Val a valuable crash course in promotion, video and photography to go along with mer music degree. In the evening she was working on her songwriting and singing wherever she could. Country Music Hall of Fame member Charlie Louvin and the Nashville Bluegrass Band’s Alan O’Bryant became her music mentors in Nashville. Louvin invited Val onstage with him at the Grand Ole Opry, and O’Bryan produced her debut album, Patchwork Heart—which included a duet with Charlie on “My Baby’s Gone.”
Valerie’s hit single, “Red Clay Halo,” written by Gillian Welch and David Rawlings, climbed the Bluegrass Unlimited, Country Music and Americana reporting charts, receiving heavy radio airplay for five years. BU included the song in their list of the top 60 songs of the decade.
The International Bluegrass Music Museum in Owensboro, Kentucky, commissioned Valerie Smith & Liberty Pike to create a special “Bluegrass in the Schools” program to share bluegrass music and its history with thousands of students in western Kentucky for 15 years. She later developed the “American Roots Music” program, which she continues to present in the United States and overseas.
Smith was invited by producer Bil VornDick and the legendary Ralph Stanley to be a part of the Grammy-nominated album, Clinch Mountain Sweethearts. Val and Stanley sang “I’ll Remember You, Love in My Prayers.”
Country Music Hall of Famer Tom T. Hall made a special appearance on Valerie’s second album No Summer Storm. Tom T guested on “Sit Down and Cry,” a song written by Miss Dixie and Tom T Hall. The Halls also invited Valerie to participate in all three albums by the “Daughters of Bluegrass,” featuring an all-female cast of singers and musicians, on Blue Circle Records.