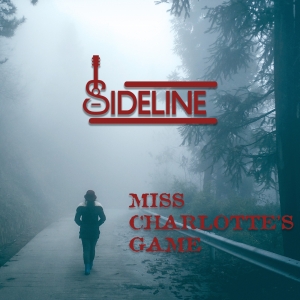 On the heels of a wistful “Just A Guy In A Bar,” the chart-topper that kicked off their 2021, and the gospel sentiments of their second single, “When The Son Rose Up That Morning,” award-winning bluegrass sextet Sideline shows yet another dimension of its musical personality with their very first song from a member of the band.

Written by singer Zack Arnold (mandolin), “Miss Charlotte’s Game” offers a tale of jealousy and murder that pays thematic and musical homage to the essential bluegrass songbook — and to folk traditions that trace back across the centuries and oceans, too. Opening with ghostly clawhammer banjo and fiddle, the song follows the outline of classic confessional ballads, with the repentant narrator recounting, from his jail cell on the eve of execution, the murder of a faithless wife and her lover.

Arnold says “Miss Charlotte’s Game” — written with his friend, Tyler Thompson — is about heartbreak. “I originally brought it to the guys in the band with a completely different idea for the melody, but when we started working it up, it went in a completely different direction,” Arnold recalls, “and that was exactly what the song needed.”

But while the group ultimately underlined the song’s classic leaning with a mountain minor melody and refrain — not to mention old-time banjo — Sideline balances the backward look with a distinctly modern rhythmic drive, full trio harmonies, sparkling bluegrass-flavored solos from Arnold and fiddler Jamie Harper, and a moody “breakdown” that hauntingly spaces out the lines of the song’s central confession.

“‘Miss Charlotte’s Game’ is the very first band original for Sideline,” notes guitarist Skip Cherryholmes. “When Gibby [Zack Arnold] went out with us on his first trip, we sat up late talking and singing, and he played this lonesome love ballad for us. Fast-forward to a band rehearsal several months later — I was playing my clawhammer banjo and he walked in singing that song again. We put a little edge on it and everything started to fall into place: the aggressive Sideline sound seemed to just flow from it, and it became one of our favorite, new, hard-driving pieces! The harmony structure is haunting, and the blend of old-time and new drive give it a very unique flavor.”

About Sideline
Sideline is a pedigreed six-piece powerhouse whose style has set the pace in Bluegrass for over two decades. Founders Steve Dilling, Skip Cherryholmes and Jason Moore can all claim their own historical significance to the genre as members of highly awarded groups, multiple Grand Ole Opry appearances and years of national and international touring. What started as a side project for the seasoned players soon moved to the front and center and they began to record and release albums in earnest. In 2019 Sideline won the IBMA Song Of The Year Award for their hit single, "Thunder Dan."

To listen to Sideline reminds the fan of why so many people fall in love with Bluegrass in the first place; pulse-pounding drive, songs sung from the heart, perfected timing and dynamics as well as a visceral emotion in the rendering. A band that was started as an off-season fun experiment has become a full-time dream team of players and singers.

The band, recorded or live, move dynamically from well chosen, hard-hitting neo-traditional covers of classic songs to new material curated by a band with a perfect sense of who they are and what they have to say. Combine all this with their on-stage energy and finesse as well as their powerful and affecting harmonies, and you have the embodiment of the North Carolina Bluegrass sound. Sideline has released 4 national projects and records for the highly awarded Mountain Home Music Company based near Asheville, NC.