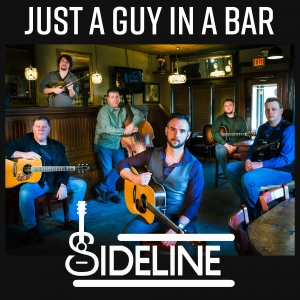 The scene is set: a crowded bar, a man sitting alone. While others engage, he’s bent over his phone, a somber face reflected in its dim blue light. It’s a scene we’ve all been witness to — and a feeling many have experienced — but even so, it’s one that’s been described in song more often than truly evoked. The new Mountain Home Music Company single from Sideline, “Just A Guy In A Bar” recalls a legion of country weepers, yet it is not only an especially compelling portrait of isolation and regret, but one that marks something of a musical departure for the award-winning sextet.

“When I think of Sideline,” says bassist and founding member Jason Moore, “I think of hard driving, in your face music. When I first heard ‘Just A Guy In A Bar,’ I knew it was a great song, but I didn't know how we could make it into a Sideline song. After trying several different things with it, we decided on doing what we thought the song called for — as opposed to what the band would normally do — and it turned out better than I could have ever imagined.”

Co-written by country and bluegrass hitmaker Ronnie Bowman, “Just A Guy In A Bar” is built around a gently insistent groove that complements the narrator’s wistful recollections of happier times, summoned as he’s “thumbing through the pictures on my phone.” With haunting fiddle and atmospheric background vocals underlining the song’s melancholy, listeners familiar with Sideline’s propulsive, traditional-leaning bluegrass will find a rarely-heard dimension of the group’s sound that emphasizes sensitivity and restraint.

“When I heard this song I knew it would be an instant hit,” notes lead singer and guitarist Skip Cherryholmes. “The passion and emotion that this ‘Guy’ was lyrically portraying make this song exceptional. It was outside of Sideline’s comfort zone, but I had no doubts that we could make it something special, and I was very excited when I was selected to sing it. I’m so proud that we gave this song the time and attention it deserved to make it the best it could be.”