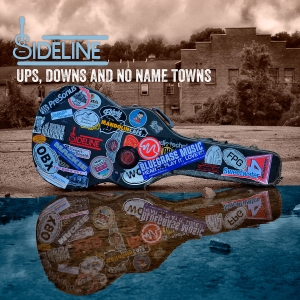 Recipients of 2019’s International Bluegrass Music Association Song Of the Year award for their hit song, “Thunder Dan,” Mountain Home Music Company’s Sideline are known as a band of superpickers. Its founders — banjoist Steve Dilling, Skip Cherryholmes (guitar) and bassist Jason Moore — can all claim their own historical significance to the genre as members of highly awarded groups, with multiple Grand Ole Opry appearances and years of national and international touring to their credit, yet the group was quick to establish an independent reputation for distinctively stylish and explosive bluegrass that has netted them chart-topping singles and well-received albums. Now, their newest full length album, Ups, Downs and No Name Towns, finds the celebrated sextet reaching new heights with a set that includes the kind of hard-hitting arrangements of classics that brought them acclaim in the first place, yet focuses on new material, chosen and delivered by a band with a perfect sense of who they are and what they have to say.

The album’s title, drawn from “This Old Guitar Case,” not only describes the band’s journey, but also acknowledges the recent struggle of the music industry — and especially its professional touring musicians — to cope with a months-long, pandemic-driven shutdown. Through the song’s depiction of the details of a road musician’s life, it reveals profound truths about journeys of hardship and triumphs, victories and defeats — all undertaken with the aim of reaching new heights as the music and the community it builds continue to grow.

“In the musical slump caused by the shutdowns of 2020, Sideline decided to pull together and start on a new project. We had time, we had each other, and we decided to put it all to work in a way we had never done before,” says Cherryholmes. “The inspiration and variety that make up this project really relate directly to the ‘Ups and Downs’ we were dealing with in real time. Working together to find ways to survive and remain relevant, while receiving dozens of calls day after day for canceled work - this became a whole new full-time, emotionally exhausting job. I truly feel that all of these experiences played the biggest part in the development of the music for this project. It affected every bit of attention and care to capture each performance exactly how we felt it, all the way down to the cover concept. In so many ways this tattered old guitar case represents the beating our band and career took through the pandemic. The fact that it still stands symbolizes our resilience and ability to persevere. ‘Ups, Downs, and No Name Towns’ is by far the most musically developed project we’ve recorded to date, but it is also the most connected and inspired effort we’ve ever experienced, personally or musically.”

Among the highlights are the project’s first single, “Fast As I Can Crawl,” a hard core bluegrass release from 2020 that showcases Sideline’s trademark combination of power and finesse in a story of a man consumed by an urgent regret for his rejection of true love, and its early 2021 follow-up, “Just A Guy In A Bar,” which offers a more melancholy take on the same situation as its narrator offers a forlorn self-portrait co-written by bluegrass and country hitmaker, Ronnie Bowman.

Other key tracks include:

”Miss Charlotte's Game,” the group’s current single, and an entry in the genre’s still-vital catalog of “murder ballads.”

“When The Son Rose Up That Morning,” an old-sounding new gospel single from earlier this year that delivers the timeless message of the Resurrection with characteristically bold harmonies.

“I’ll Always Be A Gypsy,” a hard-driving modern bluegrass take on the traveling life that serves as a new radio single.

“This Old Guitar Case,” the song from which the album title comes, which, through a focus on its traveling musician narrator’s relationship with an instrumental companion as well-worn as he is, serves as the purest expression of the project’s theme.

Listening to Sideline will remind fans of why so many people fall in love with Bluegrass in the first place; pulse-pounding drive, songs sung from the heart, flawless timing and dynamics, as well as the visceral emotion embedded in a classic performance. A band that was started as an off-season fun experiment has become a full-time dream team of players and singers.