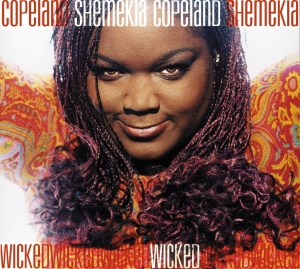 When singing sensation Shemekia Copeland first appeared on the scene in 1997 with her groundbreaking debut CD, Turn The Heat Up, she quickly became, at 18 years old, a roots music superstar. Critics from around the country celebrated Shemekia's music as fans of all ages agreed that an unstoppable new talent had arrived. Shemekia released two more CDs: 2000's Grammy-nominated Wicked and 2002's Talking To Strangers (produced by Dr. John), and in that short period of time, collected five Blues Music Awards, a Grammy nomination, five Living Blues Awards, and was honored with the coveted "Talent Deserving Wider Recognition" Award by the DownBeat Critics' Poll. Rock legend Robert Plant called her "the next Tina Turner." Shemekia has already had a lifetime's worth of career highlights, including performances on national television, appearances in films, and sharing stages with some of the biggest names in the music world. And now she can add the title 'radio host' to her already impressive list of accomplishments. Copeland will host her own weekly blues radio program, Shemekia Copeland's Blues Show, exclusively on Sirius satellite radio beginning April 22, 2006.

But all of this popular attention has only been a precursor for what is to come. Her new CD, aptly titled, The Soul Truth, is the funkiest, deepest, and most exciting statement yet from the woman CNN calls, "a legend in the making." Produced by renowned Stax guitarist Steve Cropper (who also adds his stellar guitar playing to the CD), the album is steeped in the spirit of classic Memphis soul but, at the same time, is a contemporary and up-to-the-minute slice of life. Featuring Shemekia's powerful, emotional vocals over a blistering band with horns punching in all the right places, The Soul Truth is a tour-de-force of rock, soul and blues. From the funk and fervor of “Breakin' Out “ to the timely question of”Who Stole My Radio? “ to the rock-powered “Givin' Up You,” The Soul Truth tells it like it is, with deep emotion, forceful beats and music that is satisfying, original and memorable.

Born in Harlem, New York in 1979, Shemekia came to her singing career slowly. "I never knew I wanted to sing until I got older," says Copeland. "But my dad knew ever since I was a baby. He just knew I was gonna be a singer." Her father, the late Texas blues guitar legend Johnny Clyde Copeland, recognized his daughter's talent early on. He always encouraged her to sing at home and even brought her on stage to sing at Harlem's famed Cotton Club when she was just eight. At that time Shemekia's embarrassment outweighed her desire to sing. But when she was 15 and her father's health began to slow him down, she received the calling. "It was like a switch went off in my head," recalls Shemekia, "and I wanted to sing. It became a want and a need. I had to do it."

Shemekia's passion for singing, matched with her huge, blast-furnace voice, gives her music the timeless power and heart-pounding urgency of a very few greats who have come before her. The media has compared her to a young Etta James, Koko Taylor, Aretha Franklin and Ruth Brown, but Shemekia - who was raised in the tough, urban streets of Harlem - has her own story to tell. Although schooled in Texas blues by her father, Shemekia's music comes from deep within her soul and from the streets she grew up on, where a daily dose of city sounds - from street performers to gospel singers to blasting radios to bands in local parks - surrounded her.

With all this experience under her belt, 16-year-old Shemekia joined her father on his tours after he was diagnosed with a heart condition. Soon enough Shemekia was opening, and sometimes even stealing, her father's shows. "She grabbed the crowd with her powerful voice, poised and intense," raved Blues Revue at the time. Eventually, though, it became clear to Shemekia who was helping whom. "Dad wanted me to think I was helping him out by opening his shows when he was sick, but really, he was doing it all for me. He would go out and do gigs so I would get known. He went out of his way to get me that exposure," recalls Shemekia.

Shemekia stepped out of her father's shadow in 1998 when Alligator released Turn The Heat Up to massive popular and critical acclaim. Rave reviews ran everywhere from Billboard to The New York Times, The Washington Post, The Chicago Tribune, The Chicago Sun-Times, The Boston Globe, Emerge and many others. "Nothing short of uncanny," said The Village Voice. "She roars with a sizzling hot intensity," shouted The Boston Globe. She appeared in the motion picture Three To Tango, and her song “I Always Get My Man” was featured in another Hollywood film, Broken Hearts Club. She even guested on the television program Early Edition.

In 2000 she returned with Wicked. Almost immediately the young singer was in great demand at radio, television and in the press. The opening song, “It's 2:00 A.M.,” won the Blues Music Award for Song Of The Year, and the album was nominated for a Grammy Award. She appeared twice on Late Night With Conan O'Brien, and also performed on National Public Radio's Weekend Edition and the CBS Saturday Early Show. In November 2001, she appeared on Austin City Limits to an enthusiastic live audience and on television to millions more old and new fans all across the country.

With her Dr. John-produced follow-up, Talking To Strangers, Shemekia again turned up the heat, with far-reaching material treading the ground where blues and soul meet rock and roll. The album debuted in the #1 spot on the Billboard Blues Chart and received critical praise all around the world. The Associated Press declared, "Copeland blazes through Talking To Strangers with fervor and grace. Her singing can be as thunderous as Etta James and as mellow as Chaka Khan." Vibe agreed, saying, "Talking To Strangers is a masterful blend of ballsy rockers and cheeky ballads." Features and reviews ran in The Washington Post, Billboard, Essence, Vibe, USA Today, DownBeat, Ebony and many other national and regional publications. She appeared on the Late Show With David Letterman (along with B.B. King), was featured in the Martin Scorsese-produced concert film Lightning In A Bottle, the PBS television series The Blues and even opened a show for the Rolling Stones in Chicago.

One of the many lessons Shemekia learned growing up was the importance of singing from the heart. "Nobody wants to listen to someone singing just to earn some money," she says. "You've gotta sing because you need to do it." Indeed, Shemekia's soul-satisfying vocals and the lessons she learned from her father, matched with her inner need to sing, have brought her to audiences both young and old. "I still listen to Aretha Franklin, Katie Webster, Trudy Lynn, Etta James, Howard Tate, India Arie and Angelique Kidjo. But I never try to copy them. They've all inspired me and helped me become my own person."