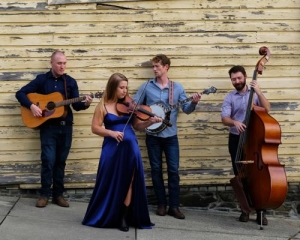 Dynamic musicians with a keen shared sense of timing and timbre, led by a strong young woman with a lot to say – and that’s saying a lot!

Shannon Bielski began her musical journey at age seven with piano, soon progressing to violin. In her teens she took lessons in bluegrass fiddle from the phenomenal Rickie Simpkins, performed and recorded with the Zekiah Swamp Cats, and won a Public Performance Scholarship to attend the world-famous Bluegrass, Country, and Old-Time Music program at East Tennessee State University where she expanded her skills and talent with the help of teachers like Hunter Berry and Jason Leek. Her dreams of having her own band floated in the clouds over the moonlit mountains of Virginia on her drives north from Tennessee. Led by Shannon’s powerful and clear vocals, Moonlight Drive features hard driving instrumentals and heart-felt originals, with Kyle Windbeck on guitar, Rob Benzing on banjo, and Greg Mulley on bass. The ensemble won first place in the 2018 DCBU Mid-Atlantic Bluegrass Band Competition. Shannon has also been recognized for her song-writing talents, taking first place in the 2018 Deer Creek Fiddler’s Convention Songwriting Contest.

This production takes off with Bielski’s “Tennessee Heart” expressing lonesome sighs for a love that’s “drivin’ me insane.” Each instrument has a brilliant say and guest singers Corey Jeter and Jesse Gregory Keen add harmonic effect. “Those Memories of You” opens with a sparse guitar and vocal intro leading to harmonies underpinned by vocalists Keen and Michelle Hannan. “East Virginia” and “Angelina Baker,” two folk classics, feature modern modalities with Keen again joining in. Benzing’s instrumental “Greenridge” adds an almost classical feel, featuring Bielski’s emotive fiddling and some soulful bowed bass. “Moonshiner” combines lightning fast picking with Bielski’s measured, somber take on the lyrics. The band steps out fast and furious on “I’ll Go Steppin” – Bielski has transformed the traditional male bluegrass grumble into feisty feminist payback that her fans will love. A bitter, moving-on song, Bielski’s “Without Love,” is enhanced by her straight-up fiddling, universal regret and some harmony provided by Chris Sanders on the memorable words: “Can’t trust my heart over my head.”

Benzing’s “Tuscarora” gives the four instrumentalists free rein to perform at full speed ahead, while Bielski’s “Loving You” sounds like a song you’ve always known, destined for stardom, with Keen chiming in on vocals. “Power Is” stands out for its dark declaration emanating sorrow and danger, dramatically showcasing the talents of the band, with Jeter and Keen adding melodic focus to Bielski’s assertive telling of this ghostly tale. “E.M.D.” is deftly executed by the four with flying fingers, sensuous slides and crisp chops. The capper is “Hot’n’Cold” allowing Bielski to let her voice range out, rising and falling, while her fiddle provides the connecting thread.

After you’re through listening to this collection – and listening again – you’ll agree that Moonlight Drive shines a new light on traditional and progressive bluegrass that is sure to please crowds of all ages.