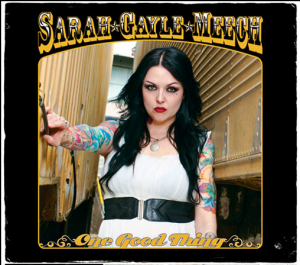 Nashville based country artist, Sarah Gayle Meech is blazing a
trail of her own, one that the founding fathers of country music
would have been proud of. Having lived in Tennessee for only five
years she successfully blends the city’s nature, spirit and seasons
into a beautifully unforgiving soundscape. Drawing inspiration
and hailing from Longview, Washington, she was surrounded by
evergreens, small towns and people with grit, themes that surface
often in her songwriting. After moving to Los Angeles for ten
years she honed her writing skills and decided to put down roots
in Nashville.

Her first album, One Good Thing, (released August 2012) was well
received by fans and critics. SavingCountryMusic.com said “One
Good Thing is country through and through, piercing the
breastplate of honky tonk with an adrenaline shot right to its
heart.” Since that release she began regular touring and holds
residencies at famed Robert’s Western World and Layla’s
Bluegrass Inn.

Her latest album Tennessee Love Song was
produced by Meech and Andy Gibson (known for being Hank
Williams III steel and dobro player), who also plays on the album.
Sarah Gayle explores themes of love, heartache, loss and
loneliness, achieving a perfect balance that truly exemplifies her
character. Meech says she drew inspiration from personal
experiences, Southern Gothic literature, and “...all the crazy
weather and beautiful landscapes in Tennessee.” She comments
on Tennessee Love Song, “I made it exactly how I wanted to. I had
a vision, and was able to bring it to life. I wrote every song, coproduced
it, and handpicked the players." She says that she was
always intrigued by Tennessee’s history and spiritual energy, with
her musical influences being “. . . literally, all over the place! At
the time I was listening to a lot of Glenn Campbell, Carole King,
Don Williams, Faces, Merle Haggard, Neko Case, Johnny Lee,
Dawes, Aretha Franklin, Tammy Wynette, Dwight Yoakam…too
many to name. I love and am inspired by so many different
artists.”

As her popularity rises, so do her achievements. She has a song
and performance featured on the new season on ABC’s Nashville,
frequent airplay on SiriusXM’s Outlaw Country, songs featured on
hit FX TV series Justified, recently won the 2015 Best Outlaw
Female Ameripolitan Award.
25
What's This
Advertisement