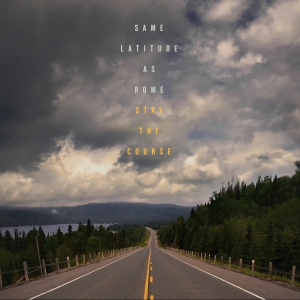 Same Latitude As Rome "Stay the Course" (3:33) is the title song and latest single release from the new CD from the Southern Ontario folk group, Same Latitude As Rome. The song combines the award-winning songwriting skills and lead singing of SLAR band leader, Peter Boyer, with the singing and bodhran mastery of Sean McCann from Great Big Sea. Using inspiring and uplifting images, the listener is given many reasons to "Stay the Course" and never give up, “until you fulfill your destiny” and “be all that you can be.”

Anyone who has heard Sean McCann perform anywhere across North America in the past few years will know his heartfelt story of meeting a woman searching for four leaf clovers along an ocean path at a Newfoundland folk festival. At a low point in his life, the meeting was an epiphany for Sean, to overcome his demons, and never give up, just like when you search for four leaf clovers. Lucky clovers are there, you just need to take the time to find them.

That woman was Anne Lise Boyer, Peter’s wife, and it lead to a friendship and eventually to Peter’s song, "Stay the Course" – written for Sean. When Sean heard it, he suggested that they sing it together with the ace Same Latitude As Rome band providing the instrumental backing. We know you will agree that their collaboration is magical!

Stay the Course" is the self prescription and follow up to Same Latitude As Rome’s 2015 release “Early Days.”

After two releases of history albums, “1812”, and “Early Days”, SLAR songwriter Peter Boyer had other non history songs that were begging to be recorded. In the end, it was the narrative quality of the songs that determined whether they made it on to the CD - two history songs, the mainstay of Same Latitude As Rome, and six others that tell great stories.

The two history songs Lost Patrol (#3-3:38), and Perth’s Mammoth Cheese (#6-3:10), are tragic and humorous tales respectively. Peter likes to say that as a songwriter, you can’t make up stories like these. Each story is very famous and well known in the Yukon and in Perth, Ontario where they originate. They deserve to be told to the rest of Canada and the world!

The title track Stay the Course (#1-3:33) is a song of hope, perseverance, and tenacity that represents the band’s own recipe for success – don’t give up! With the added voice of Canadian icon Sean McCann of Great Big Sea as a special guest of the band, Stay the Course is a message for us all as we struggle with life’s challenges.

Ol Beater Trucks - (#4-3:53) tells a quintessential small town and rural Canadian story about driving a vehicle that is classic, soulful and paid for! Haha, Blue Shelby Mustang (#2-3:29) is a Windsor, Ontario story about a young guy who builds a fast cool car from a wreck and goes on to rule the street and the track with it. Old Guys With Guitars (#5-3:38) paints the picture of any open mike that you’ve ever been too, in a self deprecating way that only comes when you are no longer a voice of the younger generation. Add in Bad Habits (#8-3:52) – about the challenge of overcoming one’s demons, whatever they may be, and Quarter Horse Pro (#7-3:20) – a tribute to the men and women who make a very good living training horses in the 21st century! How cool is that?

Add to this song stew the talents of some of Southern Ontario’s finest musicians, and production from JK Gulley at the tiny boutique Blue Gull Studio in Kitchener, ON and you get an exciting new release worthy of air play and mainstream enjoyment.

Same Latitude As Rome came to life in Essex County in early 2007, as a band concept to support the award winning songwriting craft of Peter Boyer. Named after the location of the most southerly point in Canada, inside Point Pelee National Park, Same Latitude As Rome performed throughout Essex County at bars, festivals, charitable events, and Windsor Folk open mikes, and later throughout southern Ontario as audiences grew. The members were drawn from friends and family, and later included professional players drawn from rock, jazz and symphonic backgrounds.

Fast forward to today, many song writing awards, and six CDs later, Same Latitude As Rome is staying the course!

Songs that tell true stories fascinate group songwriter Peter Boyer, as they are the essence of the great oral tradition of folk music. For Peter, Canada’s stories are hidden gems, too often eclipsed by American narratives, and waiting to be told in song. “I am a songwriter, not an historian” says Boyer, “but sometimes when I research a subject, I can almost channel the energy from the central characters, such as during the writing of the song “Lost Patrol” on our new CD. It’s a spooky feeling! If a song can ignite a further interest in, or better awareness of Canadian culture and history, I feel that I have done my job as a songwriter.”

Same Latitude As Rome charted at #34 nationally in 2015 with their last release “Early Days”, and appeared on several Folk DJ Best of 2015 lists, including Album of the Year on Blues and Roots Radio. After a three year hiatus, they’re back!

The musicians playing on "Stay the Course" album are among the best in Canada, regularly tour with bigger national artists as back up musicians, and are performers in their own right. They include producer, multi-instrumentalist,

"Masterful storytelling singer-songwriter Peter Boyer is back with “Stay The Course” - eight songs about mammoth cheeses, horses, old trucks, and old guitar players – and remaining positive in the face of adversity, and a great cameo from Great Big Sea’s Sean McCann. It’s a joy from beginning to end."