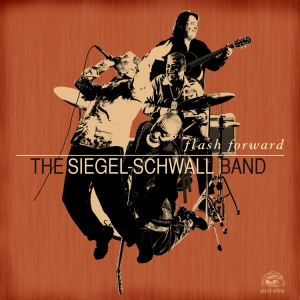 It's been over 40 years since harmonicist/pianist/vocalist Corky Siegel and guitarist/vocalist Jim Schwall met as college students and formed The Siegel-Schwall Band, one of Chicago's most beloved blues groups. From the mid-1960s through the mid-1970s, The Siegel-Schwall Band recorded ten critically acclaimed albums, toured relentlessly, and shared stages with artists such as The Allman Brothers, Janis Joplin, and Jefferson Airplane. Their subtle, acoustic-flavored blues, original songs and inventive interpretations of classics by Jimmy Reed, Willie Dixon and other blues greats were their calling card, fusing urban blues and folk into their own unique sound. In addition to their recordings, the band was renowned for their high energy, good-time live shows. They played to adoring audiences all over the U.S., which prompted Billboard magazine in 1966 to call The Siegel-Schwall Band "the latest addition to the list of great South Side performers that has included Muddy Waters, Howlin' Wolf and Chuck Berry." In 1968, they defied boundaries by combining blues and classical music with their unprecedented performance of Three Pieces For Blues Band And Symphony Orchestra with the Chicago Symphony Orchestra, and established themselves as one of the most adventurous bands around. The Siegel-Schwall Band went on hiatus in 1974, and while band members pursued other interests and solo projects, they never stopped playing music.

Fast forward to 1987, when the group reunited and released the joyous The Siegel-Schwall Reunion Concert on Alligator Records, with fans and critics alike heralding their return. The Chicago Tribune proclaimed, "The news that Siegel-Schwall is back together is something to celebrate." And so is Flash Forward, The Siegel-Schwall Band's new CD, and their first full album of new material in 30 years. Flash Forward picks up right where they left off, featuring their signature brand of fun-loving blues. Their "extended vacation" from recording (as founding member Corky Siegel calls it) has brought a new sense of inspiration to their music.

Flash Forward rekindles The Siegel-Schwall Band magic as Corky, Jim, Rollo and Sam share the spotlight on 13 new songs. From Sam's straight-ahead blues shuffle “Afraid of Love” to the politically charged humor of Jim's “Underqualified Blues” to Corky's playful blues tango “Twisted,” and the edgy lament of Rollo's “Krazy,” Flash Forward is an infectious, joyful listen from beginning to end.

Corky Siegel and Jim Schwall met in Chicago in 1964 while both were in the Roosevelt University Jazz Band. The pair soon discovered their mutual love for the blues and eventually began performing as a duo, with Corky on harmonica and piano and Jim on guitar. They auditioned at Chicago's famed Pepper's Lounge on the South Side, and were hired to play every Thursday night. "I was playing the bass drum and high hat with my feet under my Wurlitzer electric piano; sometimes I picked up the harmonica with my right hand; Jim played along on guitar," Corky recalls. "The audience went wild, probably because we were so different." This lead to a long-term musical residency at the club, and the pair played with several blues luminaries (who also became personal friends) including Muddy Waters, Howlin' Wolf, Little Walter, Otis Spann, Willie Dixon, Junior Wells and James Cotton. "We really got an education at Pepper's," Corky says.

Between 1967 and 1974, the group performed at the Fillmore West in San Francisco and scores of clubs and blues festivals, and played an important part in the era's blues revival movement while gaining new fans along the way. The band parted ways with Vanguard and signed to RCA-Wooden Nickel in 1971, releasing five albums on the label before splitting up in 1974.

The members pursued individual interests, with Schwall earning a PhD in music while Siegel followed his passion for classical music. He recorded William Russo's Street Music with Seiji Ozawa and the San Francisco Symphony Orchestra in 1976. The album won the French government's Grand Prix du Disque award and received a Recording of Special Merit citation in Stereo Review. He has written and performed works for many symphonies including the San Francisco Symphony and the National Symphony Orchestra. His music has been choreographed by four different international ballet companies and has been used for many national TV specials and documentaries including Carl Sagan's Cosmos, the ABC television series Missing Persons, and even the 1988 Olympic Men's Figure Skating competition.