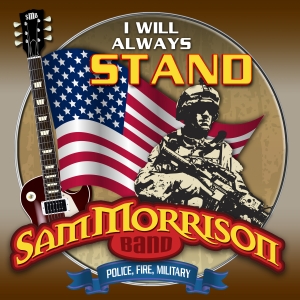 The two things you’re not supposed to talk about in polite company are religion and politics. On their new CD, Dig It Or Don’t, the Sam Morrison Band tackles both head on!

Political Correctness has no place here. Covering everything from Gun Control to The US Military to Baseball Rulings and everything in between, the SMB pulls no punches. The love of God, Country, and the American way of life, run rampant thru the lyrics.

This is a CD Charlie Daniels and Ted Nugent would be Proud of!

Musically it’s “100 Proof Southern Rock…dripping with BBQ Sauce”. Boasting a new Three Guitar Line Up the guys are carrying on in the tradition of Lynyrd Skynyrd and Molly Hatchet.

In a time where pop music has all but forgotten the art of the guitar solo, the SMB is more than happy to “show y’all how it’s done!”

Willie Nelson said once “Don’t write a song if you’ve got nothing to say”.
“Well we took that to heart”, says Morrison. “We’ve covered a lot of topics that mean a lot to us as a band. Whether you agree with us or not, we’re proud of our stance and we ain’t changing!”

So set back, crank it up loud and Dig It …Or Don’t!
3
What's This
Advertisement