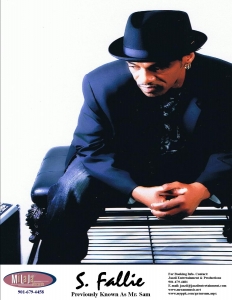 The Evolution of “S. Fallie” formerly known as “Mr. Sam” is the 2008 Blues Critic Winner of the ‘BEST PERFORMANCE BY A DUO OR GROUP’ Award, a 4 time nominee and the Winner of the 2007 ‘Blues Critic’ & the ‘Southern Soul R&B’ “Best Male New Artist Award”, born Sam Fallie in Memphis, TN. “S. Fallie’s” family moved to LA while he was a small child, but relocated back to Memphis when he was 10. While living in LA, “S. Fallie” discovered a love for music. From this discovery “Mr. Sam” joined his High School Choir and there he gained notoriety for his talent. After completing High School “S. Fallie” formed several groups (Mellow Mystics, Naked Truth Band and Perfectionist) but all were short lived. Even though the groups were short lived something good did come out for “S. Fallie” while performing with the group “Perfectionist”. The Legendary Great Late Allen Jones, Producer and Manager for the infamous “Bar-Kays” asked “S. Fallie” to come aboard as a Staff Writer and he has been on his way every since.
“S. Fallie’s” writing abilities have been compared to such greats as “Homer Banks” and “Lionel Richie” and you will soon learn why. “S. Fallie” has written several hits for the “Bar-Kays” such as: “What Goes In Da Club Stays In Da Club” featuring “George Clinton”, “Holla If You Like That”, “My Everythang” and “Lets Git Bizzy”, “J. Blackfoot”: “It Ain’t Over”, “I’m Just A Fool” featuring “Lenny Williams” and the remake with “Sir Charles Jones” (Winner of the 2007 Blues Critic Best Performance by a Duo or Group Award), “Archie Love”: “Should Have Been There For You” and “Same Woman” featuring “J. Blackfoot”, “Theodis Ealey”: “Move With The Motion”, “Jerry L”.: “Girls In The Hood” and “Daily Love”, “Kenne Wayne” - ‘You’re The Best’, “Amazing”, “Welcome To The Party”, “Bad Day” and “I Can’t Tell”, “S. Fallie” also wrote “You Gon Make Me” and “Heartache” which won Southern Soul Artist “Lacee” (Best Female Artist of the Year 2006).
Now “S. Fallie” have completed the 12 Steps 4 Cheaters Program and now he want his Baby back. But there is just one problem, he keeps talking to her voicemail until they decide it is time for him to go. That’s when Malaco Recording Artist and the Late Johnnie Taylor’s son “Floyd Taylor” informs him that he can’t work it out, because she is his now. Voicemail is the acclaimed follow-up to “S. Fallie’s” # 1 hit “12 Steps 4 Cheaters” from his debut album “Looking 4 Love”. “Voicemail” placed #5 in the Top 100 Best Songs of 2008, The “Lookin’ 4 Love” album was nominated Album of the Year 2007 Blues Critic Award placing #6, placing in the TOP 5 Albums of the Year in the JEFFERSON BLUES MAGAZINE [Scandinavian Blues Magazine]) released on “MíLaĴa Records”. Other hits from his debut album are: “I’m Comin’ Home” (Reaching in the TOP 10 UK) and “12 Steps for Cheaters” (Reaching in the TOP 20) the new album will show more versatility of “S. Fallie” talent which will leave you yearning for more.