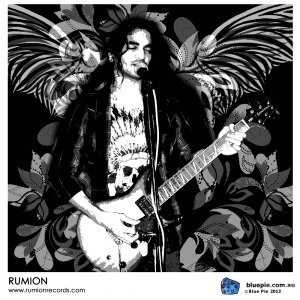 Rumion was born in 1981 in Dubai. From the time he was born, music has been his lifeblood, and the sounds that resonate from his guitar have been part of his musical DNA for thousands of years. Rumion is a rock and roll spirit travelling through time. He has been here before and his music connects instantly to all who love rock, pure rock and the essence of where rock came from.

In 2000 Rumion moved to Goa with his parents, and it was here that he was began to spread his musical wings. He applied and was accepted into the world renowned “School of Audio Engineering” (SAE London). He accepted and began to quickly develop own unique blend of rock and musical power while completing his audio engineering studies at SAE London. During his stay in London, Rumion got the chance to perform many of his original songs at highly reputable venues, as well as performing at many of the major festivals in and across the United Kingdom. He was a finalist at the London Battle of the Bands in 2008 and it was in 2008, that Rumion decided it was time to spread his wings and return to his home country and town of Goa India.

It was in Goa that the start of the production and recording on what has now become his debut album “Rumion” began. Rumion is an extremely gifted and talented multi-instrumentalist, Composer, Producer, Singer/ Song who has now become a local celebrity in the Goa musical community due to among other things his non-stop passion for life and music.

His music is infectious and seeps into every part of your body and grows into a musical experience that is truly unique, the experience that is RUMION. Rumion’s debut album “RUMION” captures the hearts and the minds of rockers worldwide. The album features experimentation with chords, sounds and song structures that all melt into the essence that is rock, to deliver to the listener,the sound that is RUMION in only the way that he can.

Rumion was very fortunate to have been brought up in a musical family, his father was influenced by a wide range of music from a very young age. Some of these influences include many of rocks iconic music legends, including artists like Jimmy Hendrix, John Lennon, Queen, The Beatles, The Red Hot Chilli Peppers, Green Day, Foo Fighters and this list goes on endlessly. With this musical DNA being passed on from father to son, Rumion had no choice but to evolve into the artist that he is today.

He feels extremely blessed to be given the gifts of melody and the ability to be able to master most string instruments in a matter of weeks. These diverse influences have made his music what it is today.

Rumion is a classic rock artist in every sense of the world. Fast forward to 2013 and Rumion would be no stranger to sharing the stage with artists like Hendrix and Clapton, if we were able to teleport back in time.

With a passion driven heart for all things rock, Rumions debut album delivers the goods. The album has 12 tracks in total. Each song is lyrically genius, while at the same time listening to the album from start to finish the listener is invited to take a unique inner journey. Inspired lyrics are sung to totally rocking beats that would be at home at Woodstock as they would be at Glastonbury today.

With powerful guitar solos that about the album and instantly transform any listener into a crazy awesome air guitarist, RUMION is here to stay and he is what rock is and should be all about ……PASSION and musical expression.

His fan base is constantly expanding the glue that makes this all organically grow is nothing but great world class rock that acts as a light for all us who enjoy having the music loud, pulsating and rocking the car at volumes that the deaf can hear.

RUMION’s debut album is available now at all leading digital retailers on the planet.

Rumion is published by Blue Pie Publishing USA for the world. For more information on Rumion please go to rumionrecords.com or search for “Rumion” on Google.