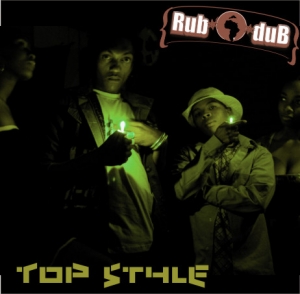 “The name Rub-A-duB does not describe the type of music we perform and record. We chose the name because of what it represents: A joyous congregation of like-minded people. In other words: A HELL OF A PARTY!”- Krabash, Lead singer & producer.

The group Rub-A-duB is the leader of a new style of South African Music called SMASH. Smash is an edgy township pop sound based on Dancehall music. It combines all their influences which are Reggae, Hip-Hop, Kwaito and R&B into a compelling new sound. They deliver their songs in different languages including Zulu, Sotho and English. Their sound can be likened to an edgy combination of Chakademus & Pliers, South African urban pop group TKZee and the hip-hop-inspired reggae sounds of Damien Marley.

Their on-line album, Top Style, has gained them many fans since its release in November 2007. With 17 tracks it touches on sounds and topics that make Rub-A-duB stand apart from the rest of the artists releasing music in South Africa.

They are currently in the studio working on their first CD release scheduled for August 2008. All registered Rub-A-duB fans will be the first to hear and get the opportunity to download the first single from that album soon. If you liked the online album then you will be blown away by what they have in-store. Their growth and maturity is evident in their lyrics, voices and production. There are also a few surprises in the form of the sound of the album and guests included. So in the meanwhile don’t hesitate to join the mailing list and keep supporting Top Style.

To find out more about how the group was formed, individual members, see group and individual pictures, where to buy and gig-guides then visit Rub-A-duB’s official website:
http://www.amuseafrica.com/serius
or
http://www.reverbnation.com/rubadub

“One of the most promising new artists in South Africa today” – The Armchair Theatre.

JOIN OUR MAILING LIST @ http://www.reverbnation.com/rubadub RIGHT NOW FOR UPDATES AND FREEBIES!
(We do not sell, rent, trade, or give away email addresses. We will not flood your mailbox with unnecessary mail. A weekly newsletter will be sent to you with announcements concerning RUB-A-DUB only. You will also have an option to opt out at any time. So chill and join the rub a dub)