Roger "Hurricane" Wilson - If You Came To Hear Music ( 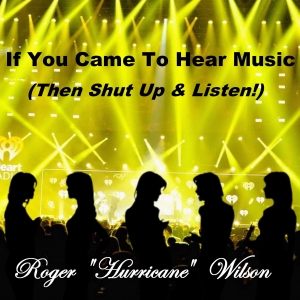 IF YOU CAME TO HEAR MUSIC Review from Beat Atlanta Online Magazine by Brenda Lorenz
Somebody had to say it and Roger Hurricane Wilson read my mind with his latest single! Maybe he’s venting a bit for us all, unless you’re the one he’s singing about in “If You Came to Hear Music”. Whether it’s in a small bar setting, a mid-sized theatre, or a packed arena, nothing is more annoying than to have someone behind you talking during the music! Or even worse, trying to talk to you! As Roger so eloquently puts it, “If you came to hear music, then shut up and listen!”
There’s more to this song than hard-core honesty. Roger gives a quick “Jerry Lee Lewis” vibe on the piano, then leads into his guitar, displaying his impeccable skills on both! His talents allow him to play most parts himself and brings it all together in one song. If you enjoy going to live music shows, and your attention and respect is focused on the musician(s) on stage, you’ll appreciate “If You Came to Hear Music”.