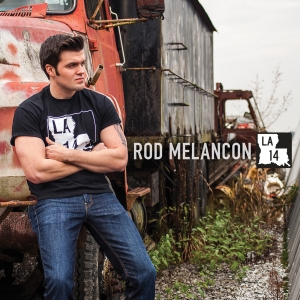 Rod Melancon Breaks Through on LA 14

It is the mark of great artists to build on past work rather than cover old ground. This is true of Rod Melancon and his upcoming five-song EP, LA 14, for the fledgling innovative label, Blue Élan Records.

The Louisiana singer-songwriter’s debut album, My Family Name, mined classic country music with fresh new songs that called up the spirit of Johnny Cash and Merle Haggard. His second album, 2014’s Parish Lines found him pushing the boundaries between alt-country and blues-rock. Now, the next chapter in the art and life of Rod Melancon begins. LA 14.

In the same way Johnny Cash captured the Arkansas of his childhood and Springsteen brought Asbury Park alive for millions, Rod Melancon has brought the sound and feeling of South Louisiana’s storied towns filled with conflicted characters. The sound is driven with a raucous blues that would make Lead Belly feel at home. Rod grew up in the shadow of Angola State Prison where the great bluesman made his home for many years.

Deep in the swamp lands of South Louisiana, found in the small towns off State Highway 14, along the Parish lines and the borders that dwell with the native sons of this often unseen heartland, there are stories waiting to be told. There are ghosts to conjure up in the night fires and bayou jamborees. It takes a special artist to conjure up the soul of the land through song and story. It takes an artist possessed of a singular vision: Welcome to the world of LA 14. It is a world that is uniquely Rod Melancon, born and bred in South Louisiana. On this album he has recorded a collection of songs that bring us to the feel of haunted and hunted swampy, South Louisiana nights.

On this EP, a preview of a full album to be released later this year, Melancon, with the help of innovative producer, Brian Whelan, former lead guitarist for Dwight Yoakum, has pushed the artist’s song-cycle into a swamp-like, country blend that moves out to the parameters of psychedelic-rock laced through with strains of deep southern blues. It is brought together by Melancon’s strong singer-songwriter sensibility. His songs here, while entirely original, echo the lyrical poetic soul of Guy Clark and Townes Van Zandt.

If the finest artists write what they know, then with LA 14 Melancon has not only written what he is intimately familiar with, he also gives us a portrait of his love for the land of his childhood and the souls he has encountered during his lifetime.

It is all there in these five songs; best friends, misfits, his family and his own deep understanding of the land of his birth. Together this set of songs form a theme revolving around the trials of life, mortality, loss and finally, redemption.

The opening track, “Perry” tells the story of a loyal and compassionate but misguided soul, sadly lost in the tragic life of violence and addiction. The song opens with a contemporary percussive electronic feel that transitions into Melancon’s reverb soaked narrative. It is a superb opening song and bodes well for the yet-to-be released album. The story of LA 14 begins with the death of youth; a wild one who no one dares to challenge, but is spiraling in his own mortality and, ultimately, falls to his own self-destructive impulses.

“Dwayne and Me” tells the moving fictional story of a second cousin who drifts in and out of the narrator’s life. The production here brings an electric guitar undertow that emerges in instrumental interludes and breaks in like waves to move the story toward its inevitable conclusion when Dwayne’s ‘number comes up in ’67.’ The quiet rendering of the concluding line, ‘I never saw Dwayne again,’ is contrasted with the passionate electric guitar-driven crescendo. It is an example of an artist and his producer working together to create a greater vision for the story and character.

“A Man Like Me Shouldn’t Own a Gun,” allows the listener a humorous if ironic honky-tonk romp with some imaginative fiddle playing along for the ride. It is one of the clearest examples of Melancon’s Cajun roots.

All that precedes cannot prepare even the casual listener for the centerpiece of this stunning collection, “Lights of Carenco”, a chillingly produced, performed and written song. Emerging from Melancon’s father’s point of view, it tells the story of the death of his brother in 1976. It is by far the hardest rocker Melancon has recorded to date. It is also the most deeply personal. Musically, the song carries a fatal, haunting grind of a hard-core metal guitar arrangement which moves into psychedelia to match the tone of the story. But, it’s the engaging narrative, wisely performed through a nightmare-like spoken word mixed in an eerie high frequency by Rod, as though he’s speaking through a telephone line that ultimately becomes bone-chilling, as he vividly paints the experience of tragedy and loss. The crash-metal arrangement and production dives head-first into the surreal heart of darkness of South Louisiana psychobilly.

If “Carencro” is a descent into grief, then the final song, “By Her Side,” elevates the listener to the heights of the gift of life-long committed love transcending death. It’s a reminder that, in the end, the path we tread is about love. It may seem at first love is lost to death, but it is ultimately found deep in the soul. With a soaring pedal steel accompaniment from legendary studio musician Marty Rifkin, the song tells the story of a pilot’s devotion for his wife, the love of his life, before and after her death. It is a song worthy of Guy Clark’s “Randell Knife” and “Desperadoes Waiting for a Train.”

LA 14 represents a new era of soul, depth and innovation for Rod Melancon. Brian Whelan’s production takes the purity of Rod’s style, enhances and magnifies it. Each of these five songs tells its own story, from the inner hell of addiction to the loyalty of a family friend, to an inside view of tragedy, to the redemption found in a life-long love. These are experiences personal and universal to one of Americana’s finest rising artists, destined to create his own legend and legacy.