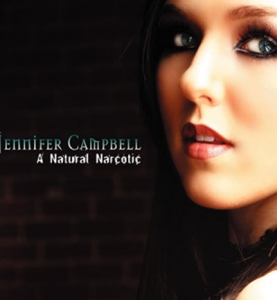 A Natural Narcotic
Jennifer’s second full-length album is a revelation, as the 23-year-old writer/singer, belying her tender years, delivers songs of depth and insight with a powerfully seductive voice that maintains a fierce presence amid dynamic rock grooves and infectious pop hooks. Produced by Reggie Ashley, A Natural Narcotic is a bravura effort from an old soul with a youthful spirit.

The tracks range from the alluring acoustic ballad “Who I am” with its cello filigree, and the sparse, piano-based “Everything” to the widescreen screaming anthem “Simple…Life,” a soaring expression of female empowerment, which Jennifer describes as “The type of song that just says screw you and get over it.”

While the subjects Jennifer touches on in her songs are contemporary, her sensibility is deeply rooted. Growing up surrounded by the music of seminal singer/songwriters like The Beatles, James Taylor, Joni Mitchell and Eric Clapton, and the Rolling Stones thanks to her musician father, Jennifer absorbed everything she heard as if by osmosis, and began writing her own songs at 16. “It’s my personal goal and nothing short of a dream to continue the standard set by those before me,” she says of her timeless approach. “No matter how many songs I write as long as one of them can reach out to someone in some way, then I know I have done my job. For music is the best therapy for a soul to hold on to.”

Jennifer, a California native, is no neophyte; indeed, before she’d finished high school, the youngster had notebooks filled with songs and was regularly performing live with the poise of a veteran. Jennifer was 16 when her first album was released “Shake my world” which her father recorded and produced. Not so long after that she was performing up a storm doing many private parties, corporate events, clubs, even Disney Land!

Ambitious by nature and powerfully motivated by these gratifying early experiences, Jennifer continued to write, including collaborations with other fellow Musicians, and continued to record, working up a set of impressive demos in L.A. Working with Grammy award winner Engineer Francis Buckley by her side it is not going to be long before you all want your own taste of this Natural Narcotic.