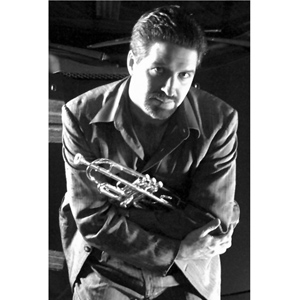 Having toured all over the world with Candye Kane; The Penn and Teller Show, Donny and Marie, Roseanne, and various other European entertainment shows, played on cruise ships; Robbie Trumpet Smith is a true performer! With his first trumpet ordered right out of a Sears catalog, Robbie started playing when he was only ten years old.

Robbie recalls the frustration he experienced as a kid; his music lessons were more of a chore than a joy. Of course, it didnt help that hed selected one of the most difficult instruments to master. However, once started down the trumpet-player path, Robbie began to hear trumpets in everything from cartoons to sitcoms. Briefly quitting the trumpet during high school, Robbie quickly resumed his lessons with a newfound appreciation and quest to hit those high notes, after hearing Maynard Ferguson, play at his High School in Escondido, Calif.

Looking back, Robbie admits the '80s created much frustration when the music instrumentation changed from acoustic mainstream to cheesy synthesized sampling. Determined to try something different, Robbie rebuilt an electric bass guitar, and joined a cover band called Slightly Bent when he was eighteen. On a trip to Las Vegas, in search of stardom Robbies rebuilt bass was stolen, causing him to pick up the trumpet once again. Robbie joined various cover bands such as The Detroit Underground, Tune Smith, and other Big Bands waiting it out.

Robbie joined the Fabulous Ultratones in the mid 1990s gigging with them in the San Diego area. The late '90s brought Big Band music back into the scene, taking a huge step back in time to the swinging sounds of the '40s and '50s. Robbie found his place in a Blues Band playing with Shelle at Croces in San Diego, which led to more gigs and the opportunity to join Candye Kane, Jonny Viau, and Sue Palmer. Robbie spent three years touring around Europe with Candye Kane, to such places as France, Belgium, Turkey, Holland, and Australia as well as extensive Domestic touring.

In 2004, Robbies lifelong dream to make his own music CD finally come to fruition, and would not have been possible without the help of several of his fellow musicians and close personal friends. Taking a few months off from the daily grind, Robbie focused primarily on writing songs and arranging music, which he recorded in Long Beach and Oceanside. It was quite a learning experience, said Robbie. When asked about his singing debut, Robbie admits that, Its something Ive always wanted to try, although he considers himself a trumpet player who sings, not a singer who plays trumpet.

Robbie admits it took him twenty-some years to figure it out but hes managed to develop his own unique style. Originally adopting the saxophone style to be more accepted, Robbie feels that no other player plays quite like he does. Its taken years of practice and study, but hes certainly developed his own slant--from the way he looks, plays, and performs. Music is a way of life for me, says Robbie, who has aspirations of opening his own recording studio. Robbie released his debut CD, Workin Like A Dog in May 2004, and the summer of 2006 has him celebrating the completion of his second solo CD, "Spanish Mist." Robbie is always looking forward and is already thinking about his next one.