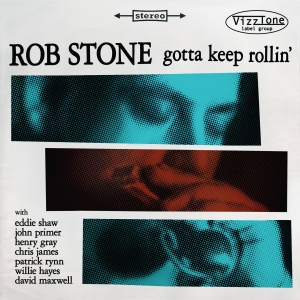 DEEPLY ROOTED TRADITIONAL BLUES that kick with a thoroughly contemporary impact, harp-playing vocalist Rob Stone is one of the busiest young bandleaders on the Windy City blues scene. His skin-tight band, the C-Notes, is comprised of blues veterans of the highest caliber that seam-lessly support Stone’s blasting harmonica and cool, streetwise vocals. These musicians have performed with and learned from many of the greats––and it shows from the first note.
Back Around Here, Rob’s most recent album on Earwig Records, brought him worldwide acclaim. It was ranked as one of 2010’s Top 50 Blues Albums by Living Blues magazine, where it spent three months on the publication’s inter¬national charts. The album was listed on the Roots Music Report Radio Airplay Charts for more than 75 weeks in all, peaking at a lofty #2. Endorsed by Hohner Harmonicas, Stone has done their instruments proud while tirelessly leading his crew across the U.S. and around the world. Rob frequently tours Japan, where he’s built quite a devoted following, and he’s also barnstormed Europe.
Rob and the C-Notes have opened for headliners as varied as B.B. King, Sheryl Crow, Robert Cray, and the late Etta James. He’s shared bandstands and recording studios with a dazzling array of blues giants: Robert Jr. Lockwood, Jimmy Rogers, Jody Williams, David Myers, Willie Kent, Pinetop Perkins, Hubert Sumlin, Henry Gray, David Maxwell, Aaron Moore, Willie “Big Eyes” Smith, Eddie Shaw, and Koko Taylor, to name only a few. Stone has made three well-received albums as a leader (Back Around Here was preceded by 1998’s No Worries and 2003’s Just My Luck which was nominated for a Chicago Music Award in the Best Blues Album category). Stone was also featured prominently in the Martin Scorsese-produced “Godfathers and Sons” episode of The Blues series that aired on PBS stations nationwide in 2003.
Stone got started on his harmonica-blowing odyssey at age 18, when he slipped into a blues joint in his native Boston to check out harp great Charlie Musselwhite and was instantly transfixed. He bought his first harp the next day. Before long, Rob was learning the finer points of the instrument from ex-Muddy Waters mouth organ maestro Jerry Portnoy and playing regularly with Rockabilly legend Sleepy LaBeef. Relocating to Colorado in 1990, he got his feet wet playing with biker bands on the smoky bandstands around Colorado Springs. Then in ‘93, legendary drummer Sam Lay invited the young harpist to sit in with his combo, leading to a job offer and a move to Chicago the next year. Touring internationally with Sam Lay for four years intro¬duced Stone to blues fans worldwide.
“I’ve worked with many harmonica players, and he turned out to be the best,” says Sam (quite an endorsement, considering Lay was a member of Paul Butterfield’s vaunted mid ‘60s band and also kept impeccable time for Howlin’ Wolf). “That cat is a good musician!”
Along with guitarist Chris James and bassist Patrick Rynn, Stone formed the first incarnation of the C-Notes in 1998. The three forged an unshak¬able bond. “We had a lot of shared experience that made us connect like brothers,” says Rob, whose harmonica heroes include Little Walter, Big Walter Horton, Junior Wells, James Cotton, and the two Sonny Boys. But no matter who’s sharing the stage with Stone, he and the C-Notes always display the same dedication to hard-hitting, honest, highly danceable blues sure to delight everyone from aficionados to neophytes.
Though he remains strongly committed to blues tradition, Rob is clearly his own man, a vibrant singer and instrumentalist boasting his own very distinc¬tive sound, and his repertoire is loaded with terrific original songs. He’s not afraid to take a few chances onstage, either.
“We never just perform songs note for note off the record,” he says. “That’s not our style.”
Rob Stone and the C-Notes play blues with love and respect for the tradi¬tion at the heart of the music. The result is a genuine, blues show unsur¬passed in energy, feeling, and authenticity that pulls in the audience from the very first note.