Rob Stone, "Back Around Here" 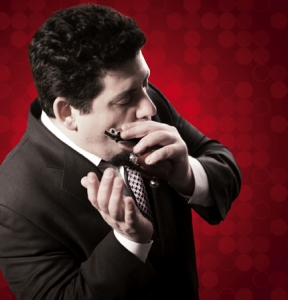 It’s been a while since Chicago harpist Rob Stone released his previous CD on Earwig Records, Just My Luck. But don’t get the wrong idea. Rob has been one of the hardest working young bandleaders on the local blues scene that entire time.

His new Earwig album, Back Around Here, shows precisely what he’s been up to, confirming Stone to be one of the top blues harmonica players around, his traditional approach deeply influenced by Little Walter, Big Walter Horton, Junior Wells, James Cotton, and the two Sonny Boys. Yet he’s clearly his own man, a vibrant singer with a high-energy attack and a deeply held commitment to fashion his own sound and repertoire.

Why the extended studio hiatus? The title track offers a clue. “That’s the name of the song, but also it sort of felt right because I hadn’t put anything out in a while,” says Stone, who was inspired to get back into a recording studio after someone inquired at the 2009 Blues Music Awards in Memphis why it had been so long since he cut a new album.

“That lit a fire under my butt!” says Rob.

Back Around Here illustrates Stone’s steady growth as a contemporary bluesman. As before, he’s collaborating with guitarist Chris James and bassist Patrick Rynn; not only do they play together every chance they get, but they write together and record together as well (Rob returns the favor on Chris and Patrick’s latest Earwig disc, Gonna Boogie Anyway). Stone has some high-profile guests on his new CD: legendary pianists Henry Gray, Aaron Moore, and David Maxwell and revered drummers Sam Lay, Willie “Big Eyes” Smith, and Willie Hayes. The end result is a tight ensemble sound that resonates with bandstand-tested authority. For the first time, Rob includes acoustic material on this album, and the originals he penned with Chris and Patrick pack a punch that’s rare indeed.

Stone got started early on his harmonica-blowing odyssey. At age 18, he slipped into a blues joint in his native Boston to check out harp legend Charlie Musselwhite and was instantly transfixed. He bought his first harp the very next day. Before long, Rob was playing with rockabilly legend Sleepy LaBeef and learning the finer points of his instrument from ex-Muddy Waters harp man Jerry Portnoy. Relocating to Colorado in 1990, he got his feet wet on bandstands around Colorado Springs. Then in ‘93, Sam Lay rolled into town. He invited the young harpist to sit in, and he must have liked what he heard: Lay hired him the next year. James and Rynn were the bedrock of Sam’s band, and the three forged an unshakable bond touring top blues clubs and festivals internationally. “We had a lot of shared experience that made us connect like brothers,” says Rob.

Stone left Lay’s combo in 1998 and formed his own band, the C-Notes. They made their self-produced debut CD, No Worries, that year, earning considerable critical acclaim. Then in 2003, Rob and the C-Notes hooked up with Earwig to release Just My Luck, the disc benefitting from Earwig’s international reach to spread the good news far and wide that Chicago has itself a fine young harpist who enthusiastically embraces the ‘50s blues tradition without copying it slavishly.

“We never just play things note for note off the record,” he says. “That’s not our style.”

When Stone isn’t kicking it into high gear live at Chicago’s House of Blues outpost, B.L.U.E.S. or any number of other area clubs, you just might find him in a far-flung locale such as Japan, where he’s toured several times. After all, blues is a universal language that Rob speaks fluently. He’s shared stages with a cross-section of blues greats: Robert Jr. Lockwood, Jimmy Rogers, Etta James, Jody Williams, David Myers (who guested on Just My Luck), Willie Kent, Henry Gray, Pinetop Perkins, Hubert Sumlin, Eddie Shaw, Koko Taylor, Katherine Davis, and too many more to recount here.