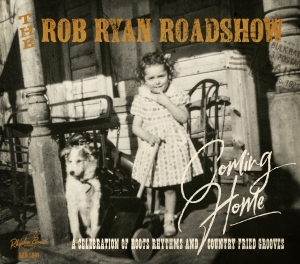 “COMING HOME” , the new album from The Rob Ryan Roadshow is a MUST HAVE for all music lovers from Johnny Cash, Sam Cook to The Ramones!! “ Coming Home”, the follow up album to their 2015 release “ LIVE AT MONTREUX JAZZ FESTIVAL”, is the band’s first studio album since 2014’s “ GOING OLD SCHOOL”. “ COMING HOME” is truly a celebration of danceble , roots rock bluesy rhythms, soulful old school R&B vibes and country-fried grooves that will definitely grab and keep all listeners from start to finish!! Simply put, A record that has something for everyone. “COMING HOME” features special guests like Malcolm Arison from The Boss Hoss,Saudia Young and other Berlin based local heroes.

The musicians: Rob Ryan ( guitar , vocals) , Ralf Sommer ( upright bass), Nico Lippolis( drums) and Jacopo Bertaco( guitars, multi instrumentalist) all blend together in the studio as tight and powerful as their high energy live shows. With all living in Berlin, they really personify the pulse of this city and it ‘s diversity of style. The band is constantly on tour and always delivers , leaving every crowd swooning and wanting more!!

This new album really highlights the ability of Ryan as a songwriter. One can really hear and feel Ryan’s experience and years honing his craft the last 25 years in Nashville, New York City and now since 2008 , in Berlin . From the rebellious first track on the 14 track album called “FREE” to the melancholy luster of “LET THE HEARTACHE BEGIN” , Ryan’s lyrics evoke the down to earthiness of a Hank Williams to the street wise sing-a-long anthems of Joey Ramone. This new album will certainly swing lots more people to their already crowded shows and broaden their audience immensely!
5
What's This
Advertisement