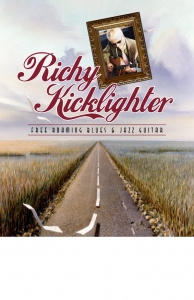 Seattle, WA, June 15, 2015 — Grammercy Records has announced that it will be collaborating with internationally renowned jazz guitarist Richy Kicklighter to reissue his classic albums to a wider audience and work with him on new recording projects. The first of these projects to be issued by Grammercy is the album "Unknown" which is being released globally on June, 19 2015.

Richy Kicklighter first came to prominence in the late 1980s after releasing albums on the Ichiban record label based out of Atlanta, GA. His debut album "Just For Kicks" was an immediate hit on contemporary jazz radio, charting both in the USA and overseas. Over the next several years Richy continued to record and release charting albums which established him as one of the most prominent new jazz guitarists of the era. Since then Richy has continued to expand the musical genres found on his albums to include blues, R&B, and world beat influences. These other stylistic elements, fused with his trademark style of melodic jazz guitar, have helped Richy to create a unique sound that is all his own.

Grammercy Records is an established label that is especially well known for their jazz and blues releases. Grammercy's catalog includes releases by legendary artists such as Billie Holiday, John Lee Hooker, Louis Armstrong and many other revered artists of the past, as well as albums by more contemporary artists in these genres. Grammercy will be reissuing classic Richy Kicklighter albums through their worldwide distribution network as well as working with Kicklighter on producing new albums.

Vaughn Kiefer of Grammercy Records says "Grammercy is proud to be working with such a unique and talented artist as Richy Kicklighter. His style of guitar is truly all his own, and something that has won Richy a lot of fans all over the world during his decades long career." The first project to be issued by Grammercy Records is the album "Unknown" which is to be released on June 19, 2015. After that Grammercy will work on issuing the rest of his classic catalog, and is especially looking forward to releasing new recordings which will feature the bluesy side of Kicklighter's playing.

Grammercy Records is a Seattle, WA based record label which specializes in releasing albums in the traditional American roots genres of Jazz, Blues, and Gospel music. Grammercy Records has issued a vast catalog of classic recordings by legendary artists in their respective genres, and continues to issue new releases by current artists who are keeping these traditional American art forms alive and relevant today.