Melt the Iceman by Reesa and The Rooters 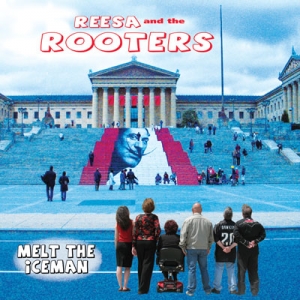 The leader of quirky '80s Philly new-wave band Reesa and The Rooters once again leads her punky pop band through a new three-song CD, "Melt the Iceman."

"If I were still hosting "Street Beat" on WMMR, Reesa's CD would be on the air! The songwriting is solid, the musicianship is polished and Reesa's voice is killer! I especially like her treatment of Alan Mann's "You Can't Talk to Her." Give the CD a listen - you won't be disappointed."
-- Cyndy Drue, WMGK Radio Personality, Philadelphia

"While Marchetti is the sole original member in this version of the group, the CD carries on with a new wave spirit that mixes a sense of fun with dance grooves."
-- Tom Wilk, Courier-Post

Although she's been compared to Blondie and the B-52s, Reesa says her sound is "punky rock for aging new-wavers."

Previously known for jumping on- and off-stage during her outrageous antics, Reesa now performs seated in a power chair. Despite being diagnosed with MS 10 years ago, she manages to keep up the same energy level and vocal power she had 30 years ago.

The third track on the CD, "You Can't Talk to Her," was written not by Reesa but by another Philadelphia indie artist, Alan Mann. This prolific songwriter died tragically in 1987, just when his popularity was rising. Reesa's treatment of Alan's song takes it from his straight-ahead, new-wave ska to a sensuous, smart and bubbling dance rhythm. Guest artist Randy Dance, who recorded the original with The Alan Mann Band in 1979, blows kick-up-your-heels sax on Reesa's version.

Reesa was born in Philadelphia, where she received classical music training as a child. Her family moved to nearby Cherry Hill, N.J., when she was in elementary school. As a teen, she joined her high school folk music club and began playing in local coffeehouses.

In the 1980s, Reesa scored international underground punk-rock hits with two 7" vinyl singles: The Rooters' "TMI/Ultraman in Surf Villa" and "Casual Cat at a Laundromat" by her female rock trio, Suburban Wives Club. Both bands toured along the Eastern seaboard and were well known in the Philly club scene.

After Network 23 disbanded, Reesa became a full-time journalist and then a Web designer. While running her own website development and hosting company, she created Relivethe80s.com, a site that documents the '80s Philly original music scene -- and got her back in touch with many musician friends.

"Melt the Iceman" marks Reesa and The Rooters' return to the indie pop scene. So let's hitch up our adult diapers and rock out :-)