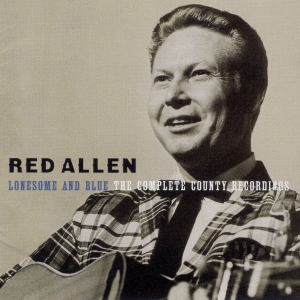 Red Allen is a member of the International Bluegrass Music Association Hall of Fame. A native of eastern Kentucky, Red possessed a powerful singing voice that was captured to good advantage on recordings he made in the 1950s and ‘60s. Although he may be best remembered for the songs he did with the Osborne Brothers in the late 1950s it was his astonishing burst of creativity and recording activity in the mid 1960s that forever anchored Red as one of the most intense, hard-edged and soulful lead singers in the annals of bluegrass.

Lonesome and Blue contains the music of two LPs (plus the previously unissued "Seven Year Blues" and "Branded Wherever I Go") that originally appeared on the County label. Lending excellent backing were Bill and Wayne Yates, Porter Church, Richard Greene, David Grisman, Craig Wingfield and Jerry McCoury. David Grisman, the renowned mandolin player who is known for his Dawg music, was barely 20 years old when he produced both of the albums on this CD.

Red Allen went on to enjoy another 30 years in bluegrass, including a stint with the Foggy Mountain Boys when Lester Flatt was forced to take some time off for health reasons. Red was a favorite on the bluegrass festival circuit and continued to make recordings. However, he never sounded better than he did when making the music that found its way to the two Rebel CDs, Keep On Going and Lonesome And Blue.