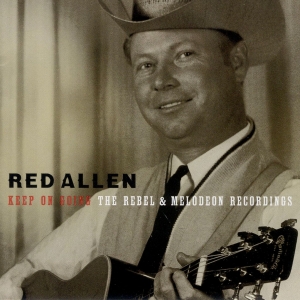 Red Allen is a member of the International Bluegrass Music Association Hall of Fame. A native of eastern Kentucky, Red possessed a powerful singing voice that was captured to good advantage on recordings he made in the 1950s and ‘60s. He is perhaps best remembered for the songs he did with the Osborne Brothers in the late 1950s.

By the mid-1960s, Red was fronting his own band, the Kentuckians, and was headquartered in the Washington DC area. His partner, at times, was mandolin wizard Frank Wakefield. Red was very active recording-wise during this time period, with songs appearing on a variety of labels, including County, Melodeon, and Rebel.

This compilation is comprised of the Rebel masters – including several previously unissued tracks – and 12 songs that appeared on a self-titled album on the Melodeon label. The collection features a stellar line-up of Washington area musicians including Frank Wakefield, Bill Emerson, Billy Baker, Tom Morgan, Bill and Wayne Yates, Pete Kuykendall and Scotty Stoneman. Among the highlights are “Journey’s End,” “Those ‘Gone and Left Me’ Blues,” “No Blind Ones There,” “Down Where the River Bends,” “Hello City Limits” and “Out on the Ocean.”
4
What's This
Advertisement