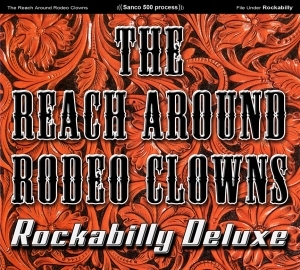 
Whipping up a staggering brew of slick licks and shenanigans, the Reach Around Rodeo Clowns have been bringing the ruckus to crowds around the world for nearly 20 years. Since the early 1990’s, the Clowns have released five red-hot albums and toured extensively, earning them a place in the hearts of a broad base of music lovers and rabble-rousers everywhere.

Drawing from roots rockabilly, surf, and rock n’ roll, with an irreverent punk attitude and a heapin’ helpin’ of moonshine, the Reach Around Rodeo Clowns have crafted a unique sound and presence that is always in demand.

The Rodeo Clowns’ music has been featured regularly on radio stations worldwide, CBS television, and several independent and horror films, including 2013’s Dracula’s Sorority Sisters. They’ve also been featured in multiple magazines, such as Hot Rod, Fangoria, CMJ Music Monthly, Big Beat, East Coast Rocker, Girls and Corpses, and more. As one of the pioneering East Coast modern roots bands, their original music has been covered by artists including the Rockats, Lee Rocker from the Stray Cats, and rockabilly legend Charlie Gracie.

With their sixth and most ambitious album, Rockabilly Deluxe, in the works for fall 2013, the Reach Around Rodeo Clowns’ momentum shows no signs of slowing down. Rockabilly Deluxe will be released by Lanark Records, and was recorded on analog and digital equipment, melting past, present, and future vibes into a record that Eddie Cochran might have made, had he listened to Revolver, then joined Mott the Hoople. A little bit country, a little bit punk, a little bit crazy, and a little bit drunk, the Reach Around Rodeo Clowns are a retro-futuristic rock n’ roll spectacle not to be missed.
14
What's This
Advertisement