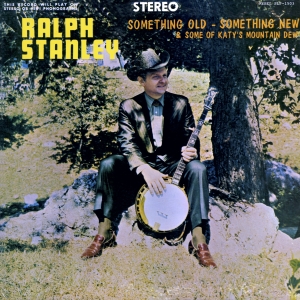 Ralph Stanley led a storied career in music for nearly 70 years before his passing in 2016. Fifty of those years were as the solo band leader of his group, the Clinch Mountain Boys. The lion’s share of the recordings he made during this time were with Rebel Records, 35 in all to be exact! A pair of LPs released by Rebel in 1970 – live recordings of the Stanley Brothers – made Ralph aware of the label. Evidently he liked the way the company did business and in February of 1971, he recorded his first album for the label.

The debut release was a gospel album called Cry From The Cross which was immediately followed by Something Old - Something New, the first secular album for Rebel. Helping with the album was a top-notch version of the band which included the ever ebullient fiddler Curly Ray Cline and stalwart bass player Jack Cooke. Playing rhythm guitar and singing lead was a Kentucky musician named Roy Lee Centers; he bore an uncanny resemblance to Ralph’s best singing partner, his late brother Carter. With Centers in the band, Ralph was able to make near carbon copies of material from the best days of the Stanley Brothers. Completing the group was a pair of talented teenagers named Keith Whitley and Ricky Skaggs. And the hits kept coming! Over a two-year period, from 1971 to 1973, Ralph Stanley and the Clinch Mountain Boys recorded eight projects. A few were albums that spotlighted the sidemen but all showed an immensely talented group at the top of their game. Something Old, Something New is among the highlights from that era.
17
What's This
Advertisement