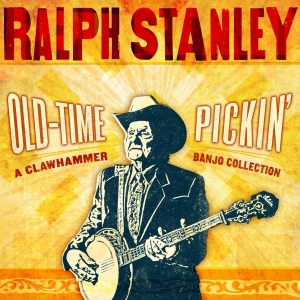 
Now that Ralph Stanley has established himself as America’s foremost singer of traditional mountain music, it is easy to overlook the fact that he is regarded by many as one of the finest practitioners of old-time clawhammer banjo. Like his singing, Stanley’s clawhammer banjo playing is a product of a particular place, the hills and hollows in an isolated corner of far southwest Virginia where he was born and still lives today.

Ralph was eleven when he got his first banjo. From the first touch the instrument felt perfect in his hands, like a tool he could make good use of, just as the miners in the coalfields near his Dickenson County home had their pick and shovel. It was his mother Lucy who taught Ralph his first song, “Shout Little Lulie,” which he learned on the first try. From the start, Ralph worked out his own clawhammer technique, using two fingers and his thumb in slashing up-and-down brush strokes. This approach gave him a much wider range than his mother’s standard drop-thumb style.

Stanley’s remarkable growth as a singer once he emerged from his older brother Carter’s shadow underscores the fact that his clawhammer playing has remained frozen in time, a feat of preservation that serves as a vital link to his beginnings. On the 1974 rendition of “Little Birdie” featured here, he’s at the height of his vocal powers, adding twists and elongations and other ornamentation, worrying the lines for all their worth. These “crooks and turns” as he calls them are skills he simply couldn’t muster as a 25-year-old when he sang on the original 1952 record. And yet the sound of his clawhammer has required no tinkering through the years and remains unchanged from the version that dates back to the Truman Era.

Old-Time Pickin’ gathers for the first time Ralph’s finest clawhammer performances for Rebel Records. The selections span a 30 year period and include nine previously unreleased songs plus three songs making their CD debut. For those who mostly know Ralph as the mournful singer of “O Death,” this collection will be a revelation. Unlike his a cappella gospel singing, with its brooding, drawn-out cadence, his clawhammer music is pure, unfiltered joy. As with the old-time singing, this old-time picking is something “bred into you,” as Stanley puts it, and it can’t be learned from an instruction manual