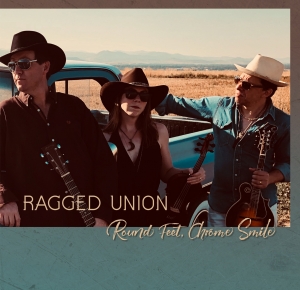 Festival favorites Ragged Union have acquired a stellar reputation courtesy of ongoing appearances throughout the US and as far afield as China and the UK. Three albums on, they’ve reaped recognition on both celestial and satellite radio, while making their mark on the various streaming services as well.

Now ten years into their career, with a new album, Round Feet, Chrome Smile on Shining Castle Music, they’ve expanded their original sound to put a greater emphasis on their songwriting skills and arrangements, a change in tack which finds them focusing on sharing enticing melodies as opposed to merely retracing a traditional template. That’s a credit to each of the three principals — Geoff Union (guitar, vocal), Elio Axhuava (mandolin, vocal), and Rebekah Durham (fiddle, vocal) — and their ability to work in tandem in order to create a robust sound that’s both energized and exuberant. The title track and Mirror Lake kick off the proceedings with a steady rolling sound that’s both earnest and engaging. Lazy Ol’ Daddy is a carefree country ramble given an old-time, folk-like finesse. The playful picking expresses a joyful attitude that’s consistently infectious, while at the same time giving earnest emotion in every note and nuance. Ragged Union have an obvious commitment to their cause, and each of these songs ring and resonate with a similarly upbeat attitude.

That’s especially apparent on the playful and punchy, How Tall Does My Bluegrass Grow, a song that finds added input from Chris Elliott on mandolin. Bassist Eric Thorin helps anchor the proceedings throughout, and on the instrumental, Way Up There, and the expressive, Down Along the River, the rhythms allow the momentum to fully remain intact.

Elsewhere, Sweet Annie slows the pace courtesy of the song’s tender trappings, and an exacting performance from all concerned. Somebody Call the Doctor and a cover of John Hartford’s Hooter Thunkit keeps that infectious enthusiasm spinning at full throttle, maintaining a delivery that’s credible and consistent.

Ultimately then, Round Feet, Chrome Smile makes it clear that Ragged Union is on a steady ascent, assuring their standing as an up-and-coming band that’s gaining bluegrass greater prominence and appreciation. It’s a fine showing from an outfit that excels simply by proving their prowess.

August 3, 2022: The Boulder, CO-based bluegrass trio Ragged Union announced their first new album Round Feet, Chrome Smile will be released on September 30, 2022. Today, they released the official video for the album’s first single “Somebody Call the Doctor.” Glide Magazine praised the band’s “damn fine harmonies” and “top notch bluegrass picking,” and proclaimed, “Ragged Union definitely delivers the kind of bluegrass goods that fit right in on a sunny summer day with a beer in hand.”

Watch the official video for “Somebody Call the Doctor” via YouTube.

“‘'Somebody Call the Doctor' is about realizing the world you grew up in is messed up, phony and repressed, and you’re ready to seek out a new place, ‘where the minds are open wide,” explains singer and guitarist Geoff Union.

Round Feet, Chrome Smile is the group’s third album and first in more than 5 years. Ragged Union has evolved musically from their origins focusing on fast-picking bluegrass and big harmony vocals to a more progressive style of string band music. The trio consists of singer/songwriter and flatpicker Geoff Union, mandolin/vocalist Elio Schiavo, and fiddle player/vocalist Rebekah Durham, a Juilliard-trained violinist who has toured internationally with the indie rock band San Fermin.

“Round Feet, Chrome Smile is a collection of original songs (and one obscure John Hartford cover that sums it all up), that continue in the same boundary-less lyrical direction that Ragged Union has always followed, while adding a musical evolution away from the stricter bluegrass sound of the previous albums,” explains Union. “I wrote or co-wrote all of the original songs, Elio and Rebekah composed the instrumentals, and we recorded it all live in a huge room in Boulder. Together we came up with some really cool and unexpected arrangements and rhythms, and it felt like a true collaboration. Elio took the vision to a whole other level in the mix. The result is an album that’s rich in tone, deep and wide in content, made with love, and totally unafraid.”

Bluegrass Unlimited Review 10.12
It’s a safe bet that in all of bluegrass music there has not been a song that mentions steel corrugators or 26-guage panels. Until now, that is, for singer/guitarist Geoff Union has corrected that omission with “Cold As Steel,” a “true life” tale rich in detail about his grandfather pilfering one such corrugator and hauling it south to Cape Fear in 1940. There, in a metaphorical sense, it reshapes his life.
That’s just one of six singularly or co-written originals the Austin, Texas-based Union includes along with two original instrumentals on his debut CD. Two of those songs are moonshiner songs, one of them, “Spirit Of 94,” probably the only bluegrass song about the Whiskey Rebellion, the other, “Lewis Redmond,” a dance-like song about a ne’er-do-well liquor seller whose neighbors remember him as the “sunshine of our lives.” Think of the latter song as a more intense “Dooley.” As with “Cold As Steel,” both are great visual songs.
More opaque is the opener, “Devil’s Card.” It’s hard to get a handle on what’s going on, but it appears someone is coming for the protagonist, and he’s waiting with a gun. What’s fascinating is the way the lyricist, Jim Harris, compresses time by cataloguing the surroundings down to the flick of a cat’s tail. That leads to the even more vague “40 Years,” a song that makes heavy use of Biblical imagery and seems to be about a life as a long struggle toward redemption. As with all the songs on this entertaining debut, you’ll need several airings to catch all the details.
Supporting Union (and his impressive guitar work) are mandolinist Billy Bright, bassists Steven Crow and Dom Fisher, banjoist Mark Maniscalco, fiddler Ricky Turpin and vocalist Christina Union. All of them give stellar performances but really shine on the Celtic-style reel, “Fannie At The Front Door,” and the gypsy jazz/Miles Davis blend of “Half Past Zero.” (Shining Castle Music, 7301 Anaqua Dr., Austin TX 78750, www.geoffunion.com.)BW

F.A.M.E. review (Frank Gutch, Jr)
It is hard not to love an album which starts off like a cross between Hot Rize and the Tony Rice Unit with music straight out of the
best of the best of the modern bluegrass players over the past three or four decades. I fell in love with bluegrass when I was a kid,
when Jimmy Martin swept across my radar, and that love journeyed through groups like The Seldom Scene, Doyle Lawson &
Quicksilver, the aforementioned Hot Rize and a string of groups including the venerable Bluegrass Album Band of which Tony Rice
was a founder (along with J.D. Crowe). Man, you had to be able to pick to be in those bands and the picking on the opening track of
Geoff Union's Cold As Steel album, Devil's Card, brought back the rush I feel each and every time I hear something far above the
norm.
In my mind, there are various kinds of bluegrass. There is the flat-out pickin' bluegrass made famous by Flatt & Scruggs. There is
the old-style mixture of voices and picking a la Bill Monroe. There is the beautiful and harmonious gospel-influenced bluegrass you
hear when groups like Seldom Scene turn their eyes to the church (while I am a dyed-in-the-wool heathen, I definitely appreciate the
inspiration of religion when it comes to music), and there is modern bluegrass which infuses all of the above and more. Union fits
well within that last category, also inhabited by all of the groups in paragraph one.
I am old enough to remember the days that modern bluegrass was called "Newgrass". I remember a very young Tony Rice and Tim
O'Brien (Hot Rize) and so many others. The music was a bit rougher back then, but over the years players and the technical guys
have honed the edges. That smoothing of sound has brought a huge amount of listeners to the genre and now that Americana has
gained a strong foothold amongst those who might not have found the music as palatable, this bluegrass hybrid is making waves.
Like I said, there is a lot of Tony Rice in Geoff Union, but there is a bit of David Grisman, also. He proves it with Half Past Zero, a bit
of what they used to call "dawg grass" or "dawg music"—a combination of jazz and bluegrass which thrills. While it is basically jazz
played on bluegrass instruments, it has a sound all its own and makes me smile. Beware, bluegrass fans, especially those who
consider jazz honking geese music. Like bluegrass, there are many styles of jazz and if this isn't a gateway to jazz, I don't know what
is.
Comparisons seem to be the only thing many readers can latch onto these days and I am reluctant to compare, but if it takes
comparing to get some people to listen, let's list a few besides the ones above: John Reischman & the Jaybirds, Buck White & the
Down Home Folks (also known as The Whites), Alison Krauss & Union Station, Carrie Hassler & Hard Rain, Steep Canyon Rangers,
and The Infamous Stringdusters. And I barely scratched the surface. Still, that should give those of you who don't know bluegrass
well a small indication of the company Geoff Union keeps, musically.
When I first heard this CD, I fully expected Union to be from Virginia or thereabouts. Turns out he is based in Texas. More proof that
Texas absorbs more musical styles than just about anywhere else in the world. If I could stand the weather and the mere idea of a
state voting in some of the biggest bastards to go political, I would consider moving there. They owe the rest of the country one hell
of a lot for giving us the Bush's. It will take more than Geoff Union to make up for it. Then again, you throw him in with the seeming
few millions of great Texas musicians, we're now a whole lot closer.
That's Cold As Steel, friends. Think Virginia. Hear Texas.

Country Music News International Review (Debbie Dean_
Geoff completed this cd with all songs written by himself, and backed by a 5 piece band. Geoff hails from the Austin Texas area, where he has been playing, writing and singing in bluegrass and acoustic bands for over 15 years.

These songs have the storytelling factors of rebellious moonshining like in the two songs of Spirit of ’94 and Lewis Redmond. Then you’ve got the story of Unions grandfather, in Cold as Steel. The cd also has two songs with some great fiddle playing, them being Fannie at the Front Door, and Half Past Zero.
This cd has the good rich sound of bluegrass sound that anyone would love to listen to. If ever in the Austin area, look Geoff up for a great live bluegrass show. You can also find him on his own website www.geoffunion.com and find him on Facebook too.