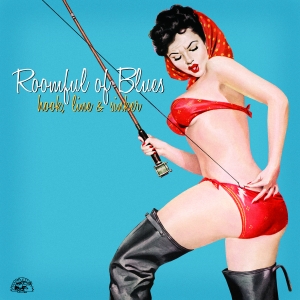 Roomful of Blues, according to DownBeat magazine, “are in a class by themselves.” With their masterful combination of jumping, horn-heavy, hard-edged blues and R&B, it’s no wonder why the great Count Basie called them “the hottest blues band I’ve ever heard.” Since 1967, the group’s deeply rooted blend of swing, rock ‘n’ roll, jump, blues and soul has earned it five Grammy Award nominations and a slew of other accolades, including seven Blues Music Awards (one for Blues Band Of The Year in 2005). The band has been led since 1996 by guitarist Chris Vachon. Guitar Player says, “Vachon burns with explosive solos and a delightfully greasy sense of rhythm.” Roomful of Blues has always maintained its signature sound by boasting great musicianship and a stellar horn section—featuring tenor and alto saxophonist Rich Lataille, who first joined the band in 1970. Lataille’s masterful playing can evoke either the fat-toned honking sax of the glory days of early rock or the cool elegance of big band swing jazz.

With a non-stop performance schedule for over 40 years, Roomful of Blues has earned critical, popular and radio success and a legion of fans around the globe. Twice, the prestigious DownBeat International Critics Poll selected them as Best Blues Band. Roomful joined the Alligator Records family with the Grammy-nominated That’s Right! in 2003, followed by Standing Room Only in 2005 and Raisin’ A Ruckus in 2008. All three CDs received massive amounts of critical and popular praise and earned them hordes of new fans. In January 2011 they’ll be back with Hook, Line & Sinker, a foot-stomping CD highlighting the intense vocal and instrumental power of the band.

Roomful of Blues has always been one of the tightest, most joyful blues ensembles in the world. They have never sounded fresher or stronger than with the current line-up. Along with Vachon and Lataille, the band’s present incarnation includes newest members vocalist Phil Pemberton, bassist John Turner and trumpeter Doug Woolverton, and long-time members drummer Ephraim Lowell, keyboardist Travis Colby and baritone and tenor saxophonist Mark Earley.

Roomful of Blues was born in Westerly, Rhode Island in 1967 when guitarist Duke Robillard and keyboardist Al Copley began exploring the swinging, jumping blues, R&B and jazz of the 1940s and 1950s. They added a horn section (including Rich Lataille) in 1970. The band’s ability to ignite a sedate crowd into a dancing frenzy solidified their reputation as the best “little big band” in New England and expanded their following into New York and Washington, D.C. In 1974, they performed with Count Basie, and a few years later legendary songwriter Doc Pomus helped them land their first record deal. In 1977, Roomful of Blues’ self-titled debut album on Island Records (reissued on Hyena Records) brought them to the attention of fans and critics from coast to coast.

Over the years there have been more than 50 Roomful of Blues members, each bringing his or her own unique talent and vision to the mix. Famed alumni include guitarist Ronnie Earl, vocalist Lou Ann Barton, saxist/vocalist Greg Piccolo and harpist/vocalist Sugar Ray Norcia. Recording for Rounder Records’ Bullseye Blues and Varrick labels between 1980 and 2001, the band cut nine albums that won them international fame and major rock radio airplay. Band leader Chris Vachon joined in 1990 and guided the band to a Grammy nomination with their 1995 album, Turn It On! Turn It Up!.

In addition to their band recordings, Roomful of Blues often backed legendary musicians like Jimmy Witherspoon, Jimmy McCracklin, Roy Brown, Joe Turner, Eddie “Cleanhead” Vinson and Earl King—stars of the 1940s and 1950s blues and R&B scene, and the very people who created the music that Roomful still keeps vital and alive. Roomful recorded albums with Turner, Vinson and King during the 1980s, and all three recordings received Grammy nominations. The Roomful Horns backed many other artists as well, including rocker Pat Benatar on her 1991 album True Love, Canadian star Colin James on his album Colin James and the Little Big Band and Stevie Ray Vaughan on his 1984 Live At Carnegie Hall album.

In 2011, Roomful of Blues will once again hit the road hard, bringing their horn and guitar-fueled music to fans around the world. With their non-stop touring schedule, long-time fans and new converts alike can see for themselves why The Chicago Sun-Times said, “This is a band on top of its game, sliding easily from big-band jazz-blues to guitar-drenched urban blues...let the party begin.” With Hook, Line & Sinker, the party has clearly already started.