Roomful Of Blues - Standing Room Only 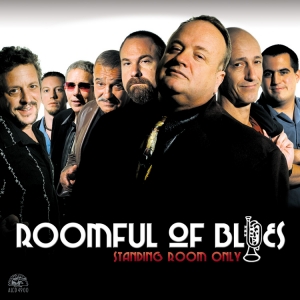 USA Today says Roomful of Blues plays “marvelous wall-to-wall grooves…between the wicked guitar work and the brassy horn section, things never stop swinging.” With their masterful combination of jumping, hard-edged blues and R&B, it’s no wonder why the great Count Basie called them “the hottest blues band I’ve ever heard.” DownBeat said the band is “in a class by itself.” Without a doubt, Roomful of Blues is all this and more. Since 1967, the band’s deeply rooted, horn-driven blend of swing, rock ‘n’ roll, jump, blues and soul has earned it five Grammy Award nominations and a slew of other accolades, including four Blues Music Awards. The band has always boasted great musicianship featuring a stellar horn section—they won two Blues Music Awards in 2004: Instrumentalist of the Year–Horns, and the coveted Blues Band of the Year.

With an almost non-stop performance schedule for the last 36 years, Roomful of Blues has earned critical, popular and radio success and a legion of fans around the globe. Twice, the prestigious DownBeat International Critics Poll selected Roomful of Blues as Best Blues Band. They joined the Alligator Records family with That’s Right! in 2003. The CD received massive amounts of praise and received yet another Grammy nomination. Now they’re back with Standing Room Only, an utterly hip-shaking set of songs highlighting the vocal and instrumental power of the band.

Remaining together for so long is not simply a matter of survival, but rather a testament to Roomful of Blues’ commitment to its originality and its ability to evolve. Over the years, Roomful’s lineup has changed but the band has always been one of the tightest, most joyful blues ensembles in the world. Currently an eight-piece unit led by guitarist Chris Vachon, the band has never sounded fresher or stronger. With vocalist/harpist Mark DuFresne, bassist Brad Hallen, drummer Jason Corbiere, keyboardist (and newest member of the group) Travis Colby, baritone and tenor saxophonist Mark Earley along with long-time members tenor and alto saxophonist Rich Lataille (the longest-standing member of the group) and trumpeter Bob Enos, Standing Room Only swings with ferocity and rocks with urgency and purpose. Moving effortlessly from eight originals to six carefully chosen covers, the expertly executed songs sizzle from start to finish.

It all began in Westerly, Rhode Island in 1967 when guitarist Duke Robillard and keyboardist Al Copley started a band that played tough, no-holds-barred Chicago blues. They soon began exploring the swinging, jumping blues, R&B and jazz of the 1940s and 1950s, and added a horn section in 1970. The band’s ability to ignite a sedate crowd into a dancing frenzy solidified their reputation as the best “little big band” in New England and expanded their following into New York and Washington. In 1974, they performed with Count Basie, and a few years later, legendary songwriter Doc Pomus helped them land their first record deal. In 1977, Roomful of Blues’ self-titled debut album on Island Records (recently reissued on Hyena Records) brought them to the attention of fans and critics from coast to coast.

Over the years there have been at least 44 Roomful of Blues members, each bringing his or her own unique talent and vision to the mix. When founding member Duke Robillard left the band in 1980, equally talented guitarist Ronnie Earl replaced him. Singer Lou Ann Barton joined the band at this time, sharing vocals with Greg Piccolo. By now the band was touring nationally and attracting bigger and bigger crowds. Roomful recorded the critically acclaimed Hot Little Mama for their own Blue Flame label and two successful albums for the Varrick label during the 1980s. In 1994 they released Dance All Night, their first featuring guitarist Chris Vachon (who joined the band in 1990) and harpist/vocalist Sugar Ray Norcia. Radio play was increasing, as was the band’s stature. Their 1995 album, the Grammy©-nominated Turn It On! Turn It Up!, was a remarkable mix of big band swing and rock ‘n’ roll, bringing the band its greatest radio and sales success to date, and giving them credibility with the rock radio audience.

In addition to their band recordings, Roomful of Blues have often backed legendary musicians like Jimmy Witherspoon, Jimmy McCracklin, Roy Brown, Joe Turner, Eddie “Cleanhead” Vinson and Earl King—stars of the 1940s and 1950s blues scene, and the very people who created the music that Roomful still keeps vital and alive. Roomful recorded albums with Turner, Vinson and King during the 1980s, and all three recordings received Grammy© nominations. They backed rocker Pat Benatar on her 1991 album, True Love, further establishing Roomful of Blues’ reputation as one of the best blues bands in the country. The Roomful Horns backed many other artists as well, including Canadian star Colin James on his double platinum album (in Canada), Colin James and the Little Big Band, and Stevie Ray Vaughan on his 1984 Live At Carnegie Hall album on Epic.

As always, the driving philosophy of Roomful of Blues as a musicians’ band puts the unit ahead of any one individual. In 2002, singer/harpist Mark DuFresne took over the vocal duties, and the band began a return to their jazzy, jump-blues musical roots. Their winning combination of jump, swing, blues, R&B and soul remains their calling card, as does their ability to fill the dance floor.

In 2005, Roomful of Blues will once again hit the road hard, bringing their horn and guitar-fueled music to fans around the world. Living Blues said Roomful of Blues plays with “bold, versatile power, expertly executed swinging rhythms and thunderous, dynamite horns.” With their non-stop touring schedule, long-time fans and new converts alike can see for themselves why The San Francisco Examiner called them “the hottest, most solid and wonderfully entertaining band around.” With Standing Room Only, they have all the proof they’ll ever need.