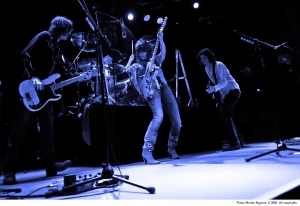 "Pretenders: Live in London" is an electrifying performance that captures the legendary band’s energy at its purest form. Recorded and filmed by Grammy and Emmy Award winning directors and producers Pierre & François Lamoureux at the London's O2 Shepherd's Bush Empire on the band's recent world tour. Chrissie Hynde, Martin Chambers, James Walbourne, Nick Wilkinson, and Eric Heywood rock a sold-out audience with their greatest and latest hits, including “Kid,” “Back On The Chain Gang,” “Middle Of The Road,” “Brass In Pocket” and many more.

With millions of albums sold and their place in the Rock and Roll Hall of Fame solidified, the Pretenders are a special band with a special place in history. The band played brilliantly in London and what can be heard on this release is an honest reproduction of that moment in time. No musical overdubs have been made and no crowd noises have been altered. This is exactly what the fans experienced that night at Shepherds Bush Empire. “Pretenders: Live In London” is available as a CD/DVD, as well as a stand alone Blu-Ray disc.