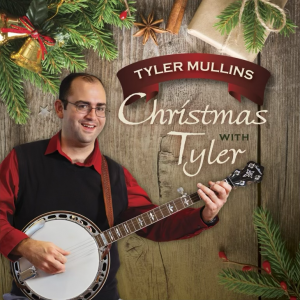 PLUM PEACHY (2022):
Originally recorded as his Senior Capstone Project at Morehead State University in 2014, Tyler Mullins' new EP, "Plum Peachy", features 5 banjo-driven songs that are sure to captivate the listener with their unique solos and solid rhythm section.

I CAN'T EVEN WALK WITHOUT YOU HOLDING MY HAND (2019):
This album serves as Tyler's first official solo album. Each track is a display of heartfelt singing and/or playing; each song has a special place in Tyler's life.

ABOUT TYLER MULLINS:
Tyler's love for music became apparent at an early age. As a toddler, he sat on the church pew pretending to play his pink guitar-shaped rattler. Eventually, this passion for music would lead him to learn a few chords on the guitar, take piano lessons, and join the school concert band playing trombone. However, at age 11 he began to take music more seriously when he decided to try the banjo, one his grandmother had bought him for Christmas when he was in kindergarten.

As a teenager, Tyler joined his school’s bluegrass band. During this time he went to Japan as part of a musical and cultural exchange program and took lessons from banjo professional Jeff Roberts. Beginning to hone his skills as a performer, Tyler helped co-found the youth-comprised group “Kentucky Sassafras” in 2004.

In January 2009, “Kentucky Sassafras” disbanded. That same month, Chloe (one of the members of Sassafras) and her husband attended a Larry Sparks and the Lonesome Ramblers show in Clay City, KY. It just so happened Larry's banjo player at the time was planning to leave the band, so Chloe told Larry about her friend Tyler Mullins. After emailing Larry samples of his playing, Tyler was hired as a member of the “Lonesome Ramblers”.

While working with Sparks, Tyler gained invaluable experience. This included performances at Rocky Grass in Lyons, CO; Bill Monroe's Bean Blossom Bluegrass Festival in Bean Blossom, IN; and the Grand Ole Opry in Nashville, TN. He also had the privilege to record on two of Sparks' albums, Almost Home and Lonesome and Then Some: A Classic 50th Celebration, the latter of which included guests such as Curly Seckler, Allison Krauss, Bobby Osborne, and Jesse McReynolds.

While touring, Tyler graduated from Morehead State University with a double-major in “Traditional Music Performance” and “Multimedia Production”. As a member of his college Mountain Music Ambassadors band, he also traveled to China as part of a cultural musical program.

Tyler left Larry Sparks and the Lonesome Ramblers in March 2015. Today, he fronts his own band, “Tyler Mullins and Friends”. In addition, he teaches music in Warsaw, KY, and is excited about his new CD, "Plum Peachy”. He hopes you enjoy it as much as he enjoyed recording it. For more information, contact Tyler at mullinsmusic15@gmail.com or by phone at 859-496-1528.
10
What's This
Advertisement