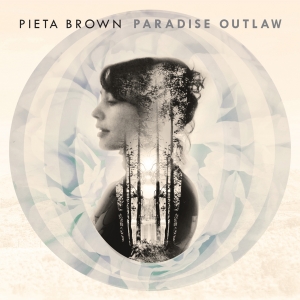 Paradise Outlaw features 12 originals by Brown plus a co-write and duet with soulster Amos Lee ("Do You Know") and a cover of Mark Knopfler's "Before Gas And TV."  Such gently intoxicating tunes as "Do You Know," "Wondering How," "Ricochet" and "Flowers of Love" feature organically orchestrated arrangements that accentuate the insight and intimacy of Brown's lyrics, the understated craftsmanship of her tunes, and the alluring immediacy of her uniquely expressive voice.

Showcasing Brown's established strengths while staking out fresh new creative territory, Brown says of the songs, "On my last album, I was recording near Nashville with top-call studio musicians who I hadn't worked with before, and exploring the idea of craft and trying to hone in on more classic forms than I had previously." She adds, "Paradise Outlaw came from a radically different place. I was thinking a lot about freedom, experimentation, poetry, folk songs, bending forms and voices. I also wrote and delivered half the songs on the banjo, which was completely new for me."

The project was set into motion in mid-2012, when Brown met Justin Vernon while both were on tour in Australia. As she recalls, "The initial spark for this quest was when the songs 'Painter's Hands' and 'Rise My Only Rose'—both of which I wrote before I ever made my first album—fell out of a notebook onto the floor in a hotel room and landed next to the copy of Howl by Allen Ginsberg that I'd happened to bring out on the road. Later that night, I met Justin and he invited me to check out his studio, and it just rolled from there. It was a fun track to follow, and one link running through it all was this spark that I caught from re-reading a lot of beat poetry, especially Ginsberg and Lawrence Ferlinghetti, and thinking about that feverish hunt for freedom, as a human."
Recording in the comfortable environment of April Base, Pieta was joined by a colorful supporting cast that included co-producer and guitarist Bo Ramsey (also the artist's husband) and members of her touring band, as well as guest vocalists Justin Vernon and Amos Lee (who co-wrote and sings a duet vocal on "Do You Know"), as well as legendary multi-instrumentalist David Mansfield, who provides pedal steel, mandolin and string arrangements on the heart-tugging instrumental "Little Swainson," and Pieta's dad Greg Brown, who adds acoustic guitar on her distinctive reading of Mark Knopfler's "Before Gas and TV.” The session emphasized inspiration and spontaneity, capturing the soulful interaction of a group of like-minded musicians in a big, warm-sounding room.
Brown continues, "Growing up around many musicians and artists, often living on the fringe, I have always felt most at home among them.  And that's where I made this recording. Surrounded by friends in an underground Mid-western goldmine."

Although the Alabama-bred, Iowa-based Brown's quietly riveting tunes and gritty, charismatic performing style resist easy categorization, they've helped her to win a fiercely loyal international fan base that extends to many of her fellow artists.

"When Pieta sings you're aware of something effortless and natural, like rain on earth," Mark Knopfler observed, while Don Was called her "a great singer-songwriter who possesses major star-power magnetism," and Iris DeMent described her as "the best poet I've heard in a long damn time."

The creative restlessness that drives Paradise Outlaw has been a constant in Pieta Brown's life. Born in Iowa, she lived in at least 17 different residences in multiple states during her youth. Her parents separated when she was two, but she grew up around many artists and musicians, absorbing all manner of bohemian artistic influences. By the age of eight, she was writing poetry and instrumental music on the piano, eventually picking up the guitar and merging the two into songs.
"Songwriting feels like home to me," she asserts. "I love songs because at any given moment they can do any number of things—make me feel better, transport me for a bit, open my mind, open my heart, articulate some wild thing I'm experiencing in a way that talking about it can't. It's a lifeline for me, and luckily it's always hanging around. One lifetime won't be enough for all the realms I want to explore. I’m experimental by nature and an explorer at heart, and that's what keeps me chasing the songs."
With Paradise Outlaw documenting a compelling new chapter of her ongoing musical journey, Pieta Brown continues to seek out and conquer new creative challenges.
As Pieta puts it in the album's dedication, "In the preface to a great book of photographs and stories about the Beats called Paradise Outlaws, John Tytell writes: 'The notion of paradise may be one of our ultimate fictions, but it still motivates action in the world. While the way the Beats saw the world made them outlaws, they also shared... a view of art that was unelitist, anti-hierarchical, egalitarian.' That makes a lot of sense to me. I feel like my songs come from the same beat streets and off-kilter countrysides, and the same worlds where peace, love and freedom will always be worth exploring. So to all my fellow paradise outlaws, thank you for the hopeful illusions, the grit, the grace... and above all, the songs and music that carry me through.
29
What's This
Advertisement