Peter Rowan - Calling You From My Mountain 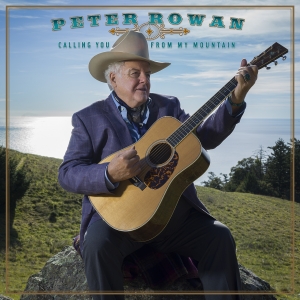 
For over six decades, GRAMMY-award winning artist Peter Rowan has been at the forefront of acoustic American music, inspiring generations of new musicians and working creatively within the roots of bluegrass, newgrass, Americana, country rock, jazz, even reggae, Hawaiian, and Tejano music. A relentlessly curious, brilliant songwriter, Rowan has had the kind of career that would give him ample opportunity to kick back and rest on his laurels now, but his new Rebel Records release Calling You From My Mountain shows that Rowan’s voice is as vital as ever, fueled by the history of our great traditions and excited for their future. Guest spots on the album from friends like Billy Strings, Shawn Camp, Molly Tuttle, Lindsay Lou, and Mark Howard, not to mention Rowan’s multi-generational band, show that Rowan’s inspiration transcends age.

Opening with Woody Guthrie’s “New York Town” (as learned from Guthrie’s friend Ramblin’ Jack Elliott), it is clear that Rowan still wears his love of classic bluegrass on his sleeve and yet retains his uncanny ability to marry bluegrass with the farthest reaches of the world. “From My Mountain (Calling You)” was inspired by Rowan’s long friendship with famed Tibetan singer Yungchen Lhamo and centers on the shared love of the freedom of mountain landscapes in both Appalachian and Tibetan folk music. “Light at the End of the World” echoes the sound of bluegrass gospel, but trains that spiritual power on Rowan’s heartbreaking memories of visiting the Hiroshima Memorial while performing in Japan in the 1970s. Even a song like “A Winning Hand,” which Rowan wrote in Nashville in the 1990s, may seem like a straightforward country song but instead reminds Rowan of his time on tour in Ireland, ocean waves crashing under a Sligo dawn.

As one of Monroe’s Blue Grass Boys, Rowan is in a unique place to evaluate the master’s musical intentions, and after all these years he’s beginning to understand what Monroe saw in him. “I think as a man in his 50s looking at a 22 year old kid, he saw me,” Rowans says, “he saw who I was before I did. He’d always yell at me on stage, ‘Sing it like Pete Rowan!’ He always wanted the individuality to come out.” Now, Rowan is in a similar position that Monroe was when he took Rowan on. That’s why it matters that Rowan’s new album features young roots music luminaries like Tuttle and Strings, and Rowan’s own band features younger players like Chris Henry on mandolin, Max Wareham on banjo, Julian Pinelli on fiddle, and Eric Thorin on acoustic bass. “I’ve got a young band, it’s fabulous,” Rowan exclaims. “They are all bursting with ideas. They’re in their years of inspiration. They are really quick learners and their ears are wide open because this generation is built on everything we did, dare I say, all those years ago.” For any great artist, live performance is the heart of their love for the music, and for Peter Rowan, the pandemic had kept him away from the kind of live music-making that he thrives on and that defines bluegrass and its many offshoots. With stages opening up again, the real meaning of his new album is becoming clear. “The joy of playing live music again calls for raising our voices from the mountain tops,” he clarifies. Rowan’s still up on his mountain, still living a life looking to the celestial heavens and wondering, and when he calls us to come and learn, we’d do well to listen.