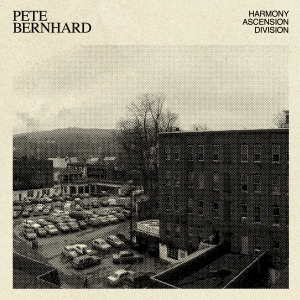 The Devil Makes Three’s Pete Bernhard To Release New Folk/Blues Solo Album
Harmony Ascension Division Is Reminiscent Of Bernhard’s Early Work With A More
Personal, Stripped-Down Sound
The Devil Makes Three’s Frontman/Guitarist Pete Bernhard is best known for his unbridled, barn-burning performances and driving roots, rock and bluegrass sound. However, with the release of his third solo album Harmony Ascension Division (Kahn) April 24 he is now showing a whole other side to the story.
Featuring nine original unreleased tracks, the new record is described by Bernhard as a “folk album that gave me a chance to worship some of my heroes” and one that he says is deeply personal.
“This record is about friendships, relationships, success, happiness and failure. Harmony. Ascension. Division.”, Bernhard said, “Many of these songs are about friends from my early teens and ‘20s so I thought the best way to talk about them would be by playing the way I did back then.”
To do so, Bernard headed back to his home state of Vermont during a break from his rigorous touring schedule with TDM3 last year and recorded the album in a small studio in the mountains with esteemed engineer Bill Esses. As the producer for the project, Bernhard enlisted fellow friends and musicians Robin Macarthur (backing vocals) and Tyler Gibbons (Bass) to help fill out the beautifully-simplistic songs and add to his signature finger-picking style.
“These songs are quieter and more personal than most of the songs I have written for the band,” Bernhard said. “This album is more like the original solo stuff I wrote before TDM3 formed. “These are all the songs that did not quite fit into the band instrumentation of TDM3 so you could say this album is sort of me going back to my roots.”
To support the release of the album, Bernhard is launching a U.S. and international radio campaign and hopes to schedule a series of solo performances around TDM3’s rescheduled tour dates. For the latest news and show dates, visit www.Peterbernhard.com.

The official track listing for Harmony Ascension Division is as follows:
I Knew You
Land Of Milk & Honey
Can’t Find You
Fool’s Gold
Dancin’
Down The Line
Long Night
Waiting For You
Lightening
Prior to Harmony Ascension Division, Bernhard released two solo albums with each receiving rave reviews. His debut, independently-released record Things I Left Behind (2006) was, as he says, “basically just me and a guitar, and a sense of introspection”. Both were deemed departures from TDM3’s driving, bluegrass rock sound, while continuing to capture the soul-searching essence and musical dexterity that Bernhard has become known for.
Bernhard continues to write, record and tour with TDM3 and rescheduled dates are available here: www.thedevilmakesthree.com.
Follow Pete Bernhard @PeteBernhard.
# # #