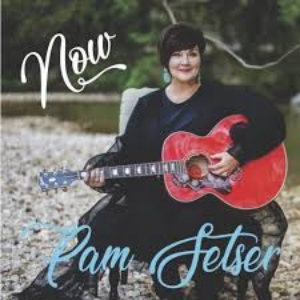 About Pam Setser
Pam Setser: A life of musical memories

A lifetime in music has given Pam Setser a treasure trove of memories from the past and the anticipation of much more to come. The folk/bluegrass/country singer and musician:

- Was part of her family band for 16 years.
- Met Doc Watson and Maybelle Carter when she was 9.
- Sang a song to Merle Haggard.
- Was on Hee Haw with her mom.
- Played at the Ozark Folk Center in her home state of Arkansas since it opened in 1973.
- Performed with her family band for Arkansas Governor Bill Clinton.
- Performed with her mom at a luncheon honoring Hillary Clinton and Tipper Gore.
- Has been on the stage with Grandpa and Ramona Jones, The Whites, and Joni Bishop.

Pam adds to her musical memories with the current lineup of groups she performs with; The Pam Setser Band, Apple & Setser, Leatherwoods, and Ozark Granny Chicks. She also performs as a solo artist. And today, Pam's newest album, Now, reflects her life in music. It is an Americana mix of folk, bluegrass, gospel, 1930s swing, and country.

It all began with her family. "I started singing when I was 5 years old," Pam recalls. "My dad was already playing some guitar; mom played some autoharp…so we started playing as a family band, The Simmons Family." She feels blessed to have been able to play music with her parents. "I am the youngest of four children, so music was a great outlet for me to see places I wouldn't have experienced otherwise," Pam says. "We had lots of fun and adventures together, and I treasure those memories." Pam also sang in church. "My grandpa was a Baptist preacher," Pam says, "so the church was and still is a part of my life."

Pam learned to play the autoharp when she was 8. "I would lay it on my lap to play so I could use my left hand for strumming" recalls the left-handed musician. She describes how "my mother tried to teach me on a right-handed [mountain] dulcimer, but I was having trouble..."; so "Lynn McSpadden, the maker, said, 'Let me make her a left-handed dulcimer.' And that was what I needed."

At 15, Pam took up spoons. "I saw someone play them and just thought how neat," she remembers. "I want to do that!" By the time she was 23, it was time to learn guitar and upright bass. "Most of my guitars have been specially ordered," Pam says. "Not every music store carries lefties. My latest guitar is a Red Gibson J200. We looked for it for three years and finally found it at a store in Texas called Southpaw." She plays upright bass, by the way, right-handed. Of all these instruments the mountain dulcimer is her favorite. "It has such a sweet sound, and I have such wonderful memories playing duets with my mom." While rearing her two children, Pam says, "my income from my music was our fun money…money was tight then."

You can find Pam on many, many recordings. "The Simmons Family Band” made four albums. She is on five mountain dulcimer albums with her mom. Her solo albums are At Last, Crooked Ridge, and her latest Now.

"Most of the songs on Crooked Ridge are more familiar songs," Pam says, "whereas on Now, most of these songs are first-time recordings." Pam enjoys a diversity of Americana music, and that is reflected in the 13 songs on Now. But at the end of the day, it is all about the song. "I didn't pick the songs thinking about genres. I picked the songs because I liked the words and melody. When we recorded them, each song took its own direction."

Pam is now with Valerie Smith's Bell Buckle Records. Valerie is also acting as Pam's creative marketing director. Pam continues to make her musical memories with her records, performances with her bands while living in Mountain View, Arkansas, the place where she grew up and still calls home.

Like many musicians, Pam has been performing on Facebook because of the pandemic. "I feel God has given me my talent, and I always hope my music blesses those who listen," Pam says. "I feed off an audience that gets into your performance. No matter what is going on in my life, when I get on stage, it's like all is OK."

“Pam Setser has the voice of an angel. That, and the fact that she has assembled some beautifully written songs and some of the greatest musicians on earth, not to mention Arkansas, makes this album a must-have for anyone who appreciates a wonderful musical escape to the Ozark Mountains. I know you're going to enjoy this! Now, listen to "NOW"!” - Shawn Camp
— Award-Winning Artists and Songwriter
9
What's This
Advertisement