The Paladins - Years Since Yesterday 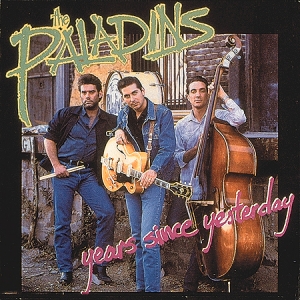 The Paladins emerged in the early 1980s as one of the leading lights of the southern California "roots rock" movement, a movement which also spawned Los Lobos and The Blasters. Fusing rockabilly, blues, swing and R&B, the three members of The Paladins have created a totally distinctive sound derived from their own talent, exuberance and spirit. Dave Gonzales and Tom Yearsley banded together to form The Paladins back in their high school days in the late '70s. Beginning as a rockabilly band (long before the brief rockabilly fad), the San Diego-based unit's first incarnation was as a quartet. They played virtually every bar in the San Diego area and developed a fanatical local following. The quartet made its recording debut with a cut on the 1982 Government Records compilation, Who's Listening.

In 1984, The Paladins trimmed down to their present trio format. Their track “Double Datin'” on the Rhino Records album, The Best Of L.A. Rockabilly, was also featured in the cult movie, Roadhouse 66, and the band even made a brief appearance in the movie. The Paladins released a self-produced single in 1985 on the Swinging label.

Music writers have likened The Paladins' high-energy blend of rock 'n' roll, R&B, swing and rockabilly to the music of Stevie Ray Vaughan, The Fabulous Thunderbirds and other hard-working roadhouse rock bands. A Washington Post critic may have described The Paladins' music best, however, when he wrote, "If musicianship, dedication, soul and the ability to express raw emotion were all you needed to gain fame and wealth, The Paladins would be known in every home in the land, and they'd have enough money to buy New York."