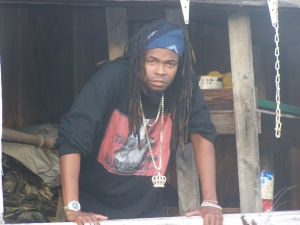 Let me tell you a little about “Kittrick Leverette” the artist most know as “P. C. THA GREAT” or should I say “P. C. Tha Great a.k.a. Franki Barns” or “Mr. Franki Barns” no matter what you call him we going to talk about him. So let’s start with the name “P. C. Tha Great”. Right now you’re probably asking your self what does the “P” stand for and what does the “C” stands for well the “P” stands for Panama and the “C” stands for City put them together and you have Panama City any questions (l.o.l). . So where does “Tha Great “come in? Well “Tha Great” is just freedom of speech. See every one unless they have low self a steam thinks of them self as the greatest person they know it’s like all these dude’s calling them self a pimp or a player and all these woman calling them self’s a diva. Now let’s get to the Franki barns part. Franki as in Franki Locus (American gangster) and Barns as in Nicky Barns (Mr. Untouchable rolling stone). It would take to much time to get in to that side so just check out his influence page and that should help you with that. This artist is a native of the south (Panama City, FL) and his main genre of music and style is rap .Most say he sounds like a mix between “T. I.” and “Young Jeezy” with the humor of say “Kanye West”.

This bio was written to inform various professionals (booking agents, A & R’S, d. j.’s, promoter’s ect.) that we are trying to move forward with the career of P. C. THA GREAT. Right now we’re planning to have his biggest cd release ever “Money Problems” the new album from P. C. Tha Great which already has 3,000 pre-order. We have put mad press behind the cd and digital release with the means of flyers, posters, music videos, radio spots, and TV spots, also we’ve included internet promotional tools like face book, my space,(over300,000 plays in 7 months) you tube, blogger and over 150 different other web sites .we have also registered his soon to be hit single Mr. Franki Barns with media base the world leading source for new music on the radio and gave away over 10,000 promotional copies of the Mr. Fanki Barns the single to consumers just to get a buzz started. Recently we have done a few shows at buck wilds formerly know as setsuns and we are planning to throw and album release party there as well to promote this cd. In the near future we plan to do more promotional shows and more collaborations with other up and coming artists. At the moment we are trying to book out spring break.

P. C. Tha Great has been an under ground indie artist for over 10 years and has completed (written, recorded and produced) over 23 albums and sold over 30,000 live sales which where never recorded with sound scan on the fact that he was just recording and selling cd’s not knowing the true meaning of sound scan and barcodes .Now we have every thing registered with sound scan (barcodes and I.S.R.C. numbers) and B.M.I. ready to rock and roll. In the past P. C. Tha Great has done a few radio jingles and plans to do more as endorsements to his projects . In the works right now we are talking with a few magazine companies and working on getting the chance to cut the theme song for the new mtv show with T.I. (BUT THAT’S US AND ABOUT 100 OTHER ACTS SO IT NOT SET YET). Via broad jam.com.

. We plan to push this “Money Problems” cd to the max and we hope you will support us Too
Right now we have a good marketing team and would be glad make you apart of our support team. Along with gig masters, broad jam, Sonic bids, taxi, gig leaders, media base, bmi, sound exchange. and many more.

Right now at the moment we are looking to work with the top record promoters, a & r’s marketing advisers, booking agents, radio directors and programmers, radio djs, mix tape djs , and distributors to help his 2009 release of money problems July 14, be a smash this summer. We are working to get the highest numbers to make this indie release a major release.