Otis Rush - Lost In The Blues 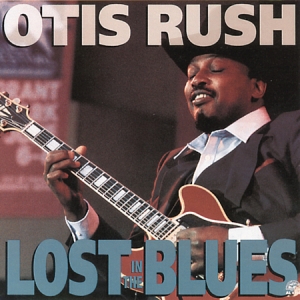 Otis Rush is considered one of the grand masters of Chicago's West Side blues sound. In the late 1950s and early 1960s, along with Magic Sam, Buddy Guy, Mighty Joe Young and the young Luther Allison, Rush created a guitar-driven style that inspired generations of aspiring bluesmen. His soaring, emotional guitar playing and his equally stunning vocal delivery have made him a legend of Chicago blues.

Rush was born and raised in Philadelphia, Mississippi, and learned to play guitar and harmonica as a child. He moved to Chicago in 1948, and was inspired by the music of Muddy Waters, Howlin' Wolf and B.B. King. In 1956, Willie Dixon saw Rush perform and was so impressed that he helped the 19-year-old Rush get a deal with Cobra Records. The first single, an intensely haunting rendition of Willie Dixon's "I Can't Quit You, Baby" shot to number six on Billboard's R&B chart. Rush continued to record for Cobra until its demise in 1958. Rush's Cobra recordings between 1956-58 are considered to be among his very best work, and defined his trademark sound. Among the stellar tracks recorded during this period were “Double Trouble,” “My Love Will Never Die,” (both produced by Willie Dixon), “All Your Love (I Miss Loving)” and “Keep On Loving Me Baby.”

After Cobra folded, Rush followed Dixon to Chess Records. He recorded the classic “So Many Roads, So Many Trains,” the only single Chess released during his short-lived tenure there from 1960-62. Rush then moved to Duke Records until 1965, where once again his label released one lone single, “Homework.” After Duke, he recorded for both Vanguard's Chicago/The Blues/Today! compilation and for Cotillion (where in 1969 he released the Mike Bloomfield-Nick Gravenites-produced album, Mourning In The Morning, a commercial failure). Capitol Records came next, and in 1971 Rush recorded the stellar Right Place, Wrong Time album, with Gravenites as producer. Amazingly, Capitol chose not to release the album, and it didn't see the light of day until 1976, when the tiny independent label Bullfrog obtained the rights and released it.

A release on Delmark in 1975, Cold Day In Hell and a handful of live albums through the '70s and early '80s kept Rush somewhat in the public eye, and he continued to perform in clubs and at blues festivals nationwide and in Europe and Japan.

In 1991, Alligator Records released Lost In The Blues, which Rush originally recorded for the Swedish label Sonet in 1977 (and was originally titled Troubles, Troubles). There have been new releases on other labels since, including a critically acclaimed album of covers for Mercury recorded in 1994 entitled Ain't Enough Comin' In, and the 1998 Grammy award-winning Any Place I'm Going, released on House Of Blues Music Co.

Rush continues to perform today and still resides in Chicago.
12
What's This
Advertisement