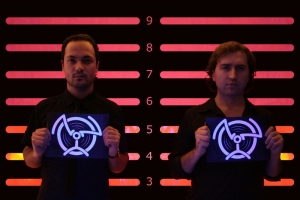 The O-ZyZ project was formed as a fresh vision of club music in July 2007 by its members Vitalie
Chian and Vlad Scorpion. The name "O-ZyZ" illustrates an escape from real world to the one of fantasy.
The music surprises by its catchy rhythm and perfect simplicity. It makes you start moving or at least
shaking your head. The boys are always looking for new ways of expression and personal sound by using
various musical methods. As a result of their creative work in winter 2008 was released their first single
"Share Your Love" which will be part of the debut album "Breakfast Party”. This track is successful on many
local radio stations entering the "hot" rotation and breaking top broadcast.

Vitalie Chian(Vetalo)
Vitalie Chian (born October 21st 1979 in Chisinau) is a romantic guy with a deep sense of beauty.
After graduating Chisinau Musical College he worked on composing and experimenting on different music
styles such as Rock, Pop, and Electro. In 2000 Vitalie was invited to play in a local alternative rock band.
Have various hobbies as football, volleyball, swimming.

Vlad Scorpion (Vladimir Colesnicov)
Vlad Scorpion (born November 9th 1983 Chisinau) aged 6 years fell in love with the guitar and now
he can’t imagine his life without music. He carries all the features of his zodiac sign: tough, passionate,
daring. Vlad performed as a guitarist in many styles and domains. Although student at Musical Academy
and Arts, Jazz department he is passionate about club music and club culture.
0
What's This
Advertisement