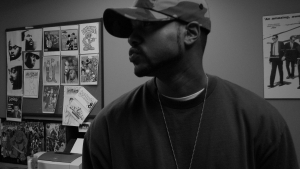 For those wondering O-Z stands for "Of-Zion" as in "Child Of Zion" or (CO-Z!) which was his nickname growing up. He got the name from a friend because of his cozy 'always in the pocket' style of rhyming. Now O-Z! is making his mark in the music industry. His unique style is the result of a lifetime of musical influences. Having grown up in Trinidad and Tobago as a young boy he was always surrounded by different forms of music, from Calypso and Reggae to Rap, R & B, Rock, and Soul. You name it, he was exposed to it, and all from a young age, which influenced his development into the multi-talented artist he is today. He moved with his family to Ontario Canada in his early teens and while moving from city to city began writing his own songs. In part because he wanted to be an entertainer, but also partly just to help him express the difficulties of being a black youth trying to adjust to growing up in a foreign country. As one of five brothers and sisters in a family that barely got by, luxuries were seldom seen. He always loved music though and began recording and experimenting with different sounds whenever he could. In high school, he was fortunate to be able to use the music class studio, and got involved with like minded friends and artists to form different bands. After realizing that making music was his main goal, he began to showcase his talent in various venues across the G.T.A. playing at venues with bands like (4/5ths) and (Bravestarr). Then he began working on developing his solo career. He worked with producers like 2-Rude (RUDIMENTAL RECORDS), Blitz (BIGHOUSE STUDIO), and Smokey (SMOKESHOP STUDIO), and was quickly noted for the unique style he brought to the hip hop industry. Then he had his baby girl. His life took a different path immediately from there with the need to put food on the table taking priority, so a hopefull career in music was replaced with the everday grind of hustling 9-5. Having the time to chase his dream was no longer an option but his abillity to write, produce, record, sing and engineer, never faded though, and as all things do with time and practice, He got better. Now O-Z! is about to bring forth an arsenal of songs that promise to make people love music again. Not just listen to it, not just enjoy it. But love it. In a time when music has seemingly lost it's way, O-Z! is about to drop a compass on the game to guide it back! He’s also very keen to point out that everything around him feeds his musical development in some way including God and his family.

His new album is a tribute to the ups and downs O-Z went through to get to where he is today. The songs provide a combination of his exciting lyrics and mellow vocals, with elements of reggae, hip-hop, jazz, and R&B. to tell a story of humble beginnings, struggles, love, hate, and living life to the fullest. Be on the lookout for him as he"s also an actor and has partnered 2 entertainment labels, 5:1 Ent., and Darkside Ent. as both artist, and as head of their artist development divisions. He also films, directs, and edits for both labels as well. That is, when he's not polishing up the shots he took from his latest photo shoots. A true Artist, always exploring new forms of expression. He believes in training the artisitc part of his mind as much as he trains his body and soul.

Check out O-Z’s online profile to view video documentaries, video shoots, show dates, photos and more. Dont forget to sign up to his mailing list as this is one artist who's future promises to be exciting!!!!
0
What's This
Advertisement