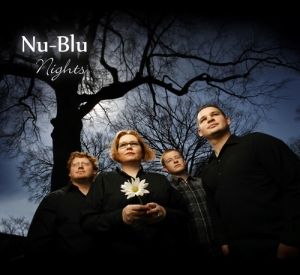 About Nights:
Although Nu-Blu had been around since 2003 they remained a relatively local phenomenon until they self-released the album “Nights” in May, 2010. With “Nights” Nu-Blu has really hit their stride with the album reaching as high as #7 on the Roots Music Report Bluegrass chart as well as charting on the Americana Music Associations Top 40 chart. The success of “Nights” was quite a feat for a self-released album, promoted only by band members Daniel and Carolyn Routh, speaks to the quality of the music.
Backed by the hard-hitting duo of Kendall Gales on mandolin and Levi Austin on banjo and vocals, Nu-Blu creates a distinctive brand of bluegrass that draws from the member’s collective experience in several different genres. The bluegrass sound is definitely a priority here throughout all the diverse material they perform ranging from older bluegrass standards to selections ported from other genres such as Nancy Griffith’s “Spin on a Red Brick Floor.”
Fall of 2010 saw Nu-Blu signing with bluegrass label Pinecastle Records where they look to build on the solid foundation that they built with Nights.