Nico Duportal and his Rhythm Dudes - Dealing With My 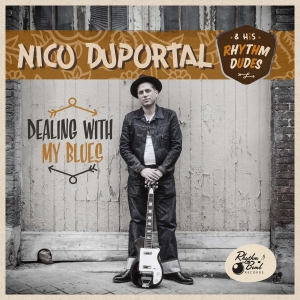 Nico Duportal and his Rhythm Dudes – Dealing With My Blues
French Rhythm and Blues guitar player and singer NICO DUPORTAL presents his fourth and up to date best longplayer on RHYTHM BOMB RECORDS.
The release of the last effort „Guitar Player“ in 2015 was a milestone in the career of the six piece band of bandleader, songwriter, leadguitar player and singer NICO DUPORTAL . Not only Blues fans but especially the Rock and Roll scene got an eye on Nico‘s bluesy and rockin‘ style. „Dealing With My Blues“ brings his music to a new level. Without leaving the 1950s music scene he makes friends with some more modern styles as Soul and early 1960s Blues. Piano player OLIVIER CANTRELLE adds a warm and rockin Hammond organ to many of the songs. Nearly all songs are written by DUPORTAL and his band mates and his belgian colleague TIM LELEGEMS (FRIED BOURBON, SHAKEDOWN TIM & THE RHYTHM REVUE) added some lyrics too. Not a big surprise, NICO DUPORTAL produced Tim‘s last recordings that was a start of this colloberations. Blues-veteran BENOIT BILLOT aka BENOIT BLUE BOY wrote the instromental „Benzola Ascensor“, on which he plays harp too. Nico teamed up with legendary songwriter Don Cavalli for the soulful ballad „Mess And Chaos“ . „Dealing With The Blues“ is a colorful mix of Nico‘s many talents. From 1950s uptempo Rock‘n’Roll sounds („I Know The Rules“, „Long Way To Go“), swingin‘ songs („Sometimes“, „The One To Blame“), late 60s instros a la VENTURES („Soul Patch“) or groovy cool downtempo classics („Junior’s Mambo“, „Mess And Chaos“) - NICO and his RHYTHM DUDES deliver a interesting, modern, sometimes funny ( see „I Will Unfriend You” - a jivin‘ persiflage on the modern day social media hype) album, without leavin‘ his fans of authentic 1950s Rhythm and Blues sounds behind.

Rockin' Rhythm & Swingin' Blues, that's a name suited to the music served up by the frontman, guitarist & singer Nico Duportal, who leads his "real deal" band, The Rhythm Dudes. Nico draws on the full spectrum of the deep black roots of Afro -American music and performs some of the finest early Blues and Rhythm ‘n Blues music being played in Europe today.
Avid dancers and passionate music lovers form the base of Nico Duportal & His Rhythm Dudes followers whenever they play in packed out venues throughout Europe.
Their goal is always to develop new fans and create a new musical circuit. Their target
is to make people dance, shaking their ‘money makers’ like it was going out of fashion!
Oscar McLollie, Johnny Guitar Watson, Little Richard and Ike Turner are some of Nico’s heroes and their inspiration colours his astonishing playing.
Nico Duportal & His Rhythm Dudes have also supported and backed up many of the international musical performers and Rock n’ Roll and Blues legends who have toured Europe, such as: Big Jay McNeely, Lynwood Slim, Mitch Woods, Wanda Jackson, R. J Mischo, Roddy Jackson, Gizzelle, Ruby Ann, Junior Watson, Mark Tortorici and Alex Vargas.
Nico Duportal has also appeared on stage with Big Sandy, The Memphis Kings and Kid Ramos and was on the list of special guests on the latest “Mannish Boys” release Wrapped up and Ready (Delta Groove Productions), including Artists like Kim Wilson, Kid Ramos, Mike Welch, Fred Kaplan and Sugar Ray Ford.
The band has toured all over the world, playing festivals and clubs in Belgium, Holland, Germany, Luxembourg, Scotland, England, Scandinavia, Spain and Italy, performing for enthusiastic crowds as far afield as the USA and Australia.
Often heading the stage of the legendary Parisian swing temple "Le Caveau de la Hachette”, Nico’s talents are requested more and more in Europe, and he is especially popular in California, where his incendiary performances galvanize both listeners and dancers.
The original Rhythm & Blues and Rock’n’Roll that Nico and his band have both created and resurrected has found an ever growing army of fans.
11
What's This
Advertisement