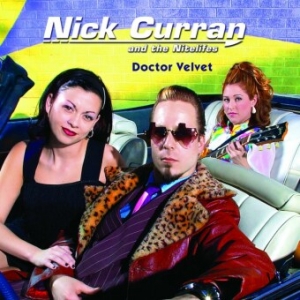 Nick Curran's career has been on a meteoric rise since the February 2003 release of his Blind Pig debut, Doctor Velvet, winner of the 2004 W.C. Handy Award for "Best New Artist Debut." And with good reason. He's an original new talent who has captured a golden musical moment in time and made it his own.

Though he's only in his 20s, Curran artfully creates raw, powerful music that recreates the exuberance and rebelliousness of the dawn of the rock 'n' roll age. A twenty-first century hybrid of Little Richard and T-Bone Walker, the young guitarist/vocalist displays a veteran's mastery of the nuances of roots rock and blues idioms. It's surprising that someone so young could breathe new life into musical forms that are more than twice his age, yet do it in such a way that makes the familiar sound startlingly new. He not only skillfully reinterprets R&B and jump blues classics in the authentic style of the original recordings, he also crafts original tunes that hold their own with the masters.

One of the first things you notice upon listening to Nick Curran's recordings is how much they actually sound like classic R&B records from the late 40's and early 50's. If they weren't on one of those little silver discs, you'd swear you were listening to rare 45s or 78s. Using a live, one-take technique and vintage recording equipment, Curran uncannily manages to recreate not only the sound but also the spirit of those earlier, wonderful times.

But Curran is far more than a mere revivalist, a staid neo-traditionalist, or a wannabe pretender. He's able to infuse each track with a freshness, urgency, and vitality that are lacking in many modern blues and rock releases.

Curran grew up in the Portland, Maine area, where his dad was a professional musician. His father would give him Fabulous Thunderbirds and Duke Robillard records and say, "If you want to be a good guitar player, learn all these solos, every note!" At 15 Nick was playing guitar with his father's blues band, Mike Curran and the Tremors. By the time he was 18 Curran was playing guitar in a local rockabilly band, when he was introduced to rockabilly legend Ronnie Dawson. He joined Dawson's band and began his first national tour, playing guitar with Dawson for the next six months. His reputation as a hotshot guitarist was beginning to spread. When he got off the road from Dawson's tour, he got a call to go back out on the road with Texas rockabilly queen Kim Lenz. His guitar work on that tour impressed Lenz so much she asked Nick to move from New England to Dallas to join her backup band, the Jaguars. He stayed in that band for two years, getting some recording experience along the way on one of Lenz' albums (The One And Only).

When he wasn't on the road with Lenz, Curran played the Dallas-Fort Worth area extensively with local blues notable Hashbrown, who introduced the young guitarist to many influential people on the blues scene and included him in the recording of the Browntones' CD Have Some Fun.

Curran immersed himself in the vibrant blues traditions in Dallas as well as the roots music scene in Austin. He even did a touring stint with retro-country sensation Wayne Hancock. Nick had been a long time admirer of Duke Robillard and Roomful of Blues and always thought he wanted to have a similar band. By 1999 he was anxious to branch out from the rockabilly scene and start doing more blues stuff, as well as his own material. He recorded his debut album, Fixin' Your Head, for the Texas Jamboree label. Blues Revue named it the "Best of the Box" for that issue, saying, "Curran sounds old in the right way, doing blazing hepcat swing." The following year he formed the Nitelifes because he wanted to tour with his own band in support of the record.

In 2001 he released his second album for Texas Jamboree, entitled Nitelife Boogie. Living Blues noted that Curran's "secure, uncompromising musical vision and in-the-red recording concepts leave most modern blues bands behind." A few months after the release of this album, Curran decided to move to Austin, where he knew there was a large pool of talented players.

One of the local musicians who took notice of Nick's emergence on the Austin scene was Jimmie Vaughan. Impressed by what he heard on Curran's CDs, he invited Nick to sit in with him at a show at Antone's and later, in a Blues Revue interview, cited Curran as one of his favorite up-and-comers, calling him "just a total ****-kicker." When it came time for Nick to record Doctor Velvet, his national debut on Blind Pig Records, Vaughan was happy to join Curran in the studio to guest on a couple of tracks.

Doctor Velvet generated immediate critical acclaim. Blueswax called it "one of the finest albums of the year" while Living Blues dubbed it "outstanding" and Blues Revue predicted, "Curran is poised for success in a way that has nothing to do with age." The essential guide to retro culture, Atomic magazine, added, "As good as Nick Curran's previous album was, it's hard to believe he could make one better. Did he ever...this is the album of the year." Even the magazine of Southern culture, Gritz, weighed in with, "I can't recommend this one highly enough." Mainstream publications such as Guitar One and Vintage Guitar also took note of the arrival of a new recording star, with the latter offering this review: "You know how some records just ooze fun? That'd be this one. Nick and his group mix jump blues, boogie, and greasy rock and roll into a perfect stew."

Nick and the album also attracted international attention, with rave reviews in U.K. magazines such as Blues & Rhythm and Mojo ("Festival organizers, get this band over here!"), appearances on the cover of magazines in Germany, and winning a Trophees France award for "Best New International Blues Artist."

Meanwhile, Nick and the Nitelifes have been generating a solid buzz with their live shows. With head-turning performances at festivals and clubs across the country, the young guitarist and singer has established himself as one of the freshest, most exciting new talents on the scene. Blues Revue summed it up as follows: "Nick Curran is making his mark with an exciting personal style that manages to retain a vintage-tone purity. The word of mouth Curran generates is all good. Internet discussion boards are shot through with postings and excited conversations by stunned people who just saw Nick and his band for the first time. Nick Curran is a don't miss performer."

On his new Blind Pig release, Player!, Curran displays the full range of his musical arsenal - from rambunctious, raucous rockers to brash, outrageous jump blues and R&B to tender, confident ballads. His strong vocals display a surprising range - from soulful crooning to raspy swagger, at times uncannily close to heroes of his such as Amos Milburn or Roy Brown - while his spot-on guitar playing stings like a rattlesnake. Add Nick's uncanny knack for recreating the feel and vibe of classic R&B and rock and the swaggering backing of the fabulous Nitelifes and you've got a nonstop, hard-rocking rhythm and blues party album that only Nick and the Nitelifes could deliver.

Postscript: Nick passed away on October 6, 2012, succumbing to oral cancer.
13
What's This
Advertisement