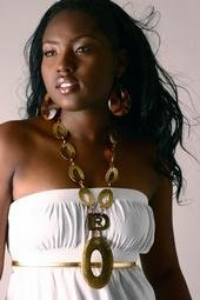 Ne’sha hails from Bennettsville, SC. Ne’sha who is an innovative songwriter and performer, began her music career at the age of 6 by joining her father’s band; Starlight Choir. As a member of the Starlight Choir she opened shows for prominent organizations such as, the South Carolina Black Caucus, The NAACP and the SC State Senators Convention.

At the age of 12, she was introduced to manager Cheryl Butler (former A&R of Qwest Records) who placed her in the group Rain. Rain, the all girl trio was fortunate enough to grace the ears of many record executives but soon disbanded due to the personal complications of one of the other members. Thereafter, she began working with Vincent Herbert of Black Ground Records (former label of R&B singer Aayliah). Vincent Herbert loved Ne’sha’s material and was working extensively with her when a tragedy struck that would leave Neesha fighting for her life.

In a near fatal car accident, Ne’sha was left with her hip broken in two places as well as less severe injuries. After grueling surgeries and lengthy rehabilitation, Ne’sha finally learned to walk again. This forced time off from the music industry had Ne’sha contemplating her future as a recording artist.

Three years later and fully rehabilitated, Ne’sha returned to the music scene signing a recording contract with an independent label based out of North Carolina and started working on her first album; “Diary of a Woman Scorned”. “Diary of a Woman Scorned” drew mixed reactions at the time of its regional release; critics liked Ne’sha’s vocal talent but were unmoved by the selection of material. After one album on the independent label, Ne’sha recently opted out of her contract citing creative differences as the reason.

Ne'sha has always had an ambition to deliver a strong voice and her experiences to the world through the art of music and the culture of soul. Ne’sha is the most talented female artist in which her sound has been compared to artist such as Chaka Khan, Toni Braxton & Mary J Blige just to name a few. This is only one of the many statements made to compliment her style and performance. Between the stage and the microphone is something this powerful artist could never get enough of while strengthening her credibility as a performer. Her father and late mother who has been a great influence in her life mentored this young female to be a strong, determined, self efficient woman encouraging her to pursue all dreams she can possibly accomplish.

Ne’sha is currently working with So So Def producer; Victor “Big Vic” Newton and Tim “Krazy Figz” Walls who recently produced tracks for Akon, Lil Boosie and other mainstream artists. Ne’sha is perfecting her unique and diverse sound that transcends the genres of R&B, Pop, Funk and Hip Hop. She is definitely on top of her game with music everybody can relate to. Ne’sha continues to write her own songs, record and perform captivating shows while preparing for the mainstream. Ne’sha has had the opportunity to open shows for and /or perform with Tank, K-C (of Jodeci), Yolanda Adams, Tom Joyner Morning Show, Swiss Beats, Khia, Plies, Waka Flocka and numerous other artists.
This Soulful Songstress is ready to start a new phase in her career; she is guaranteed to leave a major mark on the music industry…

She is currently working on a new album, set to be released in summer 2011