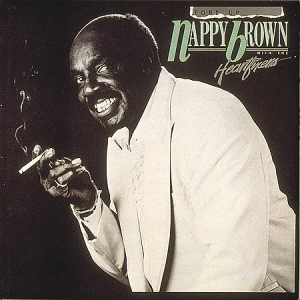 The mid-1950s was an era of radical musical change. It was a time when musical and racial barriers began dropping, when the spirit and drive of rhythm & blues and rock 'n' roll burned with an intensity and joy that has never been equaled. Big-voiced blues shouters belted out their tunes backed by rocking bands of guitars, drums and horns. During these golden years, a group of performers emerged in the forefront as pioneers of this sound. Napoleon "Nappy" Brown was one of these.

Born in Charlotte, North Carolina in 1929, Nappy Brown's earliest musical influences were blues and gospel. As a youngster he performed in several gospel groups, including the Heavenly Lights. Nappy's singing eventually brought him in touch with the Savoy label, which signed him in the early 1950s to compete with shouters like Roy Brown, Wynonie Harris and Big Joe Turner.

A big man with an incredible amount of energy, Nappy soon became famous for his wild stage antics. Touring with the likes of Little Richard and Jackie Wilson, Nappy always got the crowds involved in his performances, often getting in the audience down on his knees and singing or dancing with the ladies.

Between 1955 and 1959, Brown appeared over and over on Billboard's R&B charts, with hits like “Don't Be Angry,” which reached number two nationwide. Other big songs for Nappy included “Pitter Patter” in 1955, “It Don't Hurt No More” in 1958, and “I Cried Like A Baby” in 1959. But probably the song that had the biggest impact for Nappy was a tune he wrote and recorded, but is best remembered as a hit for Ray Charles—“Night Time Is The Right Time.”

In the early 1960s, Nappy continued to record and tour, but eventually ended his association with Savoy Records. Except for a lone album done in 1969 on Elephant Records, Nappy remained unrecorded for years. Settling down in a small town outside of Columbia, South Carolina, he concentrated his singing efforts towards gospel during the 1970s and early 1980s. But renewed interest in his R&B recordings abroad and the re-release of a number of his early songs on albums in Europe resulted in a highly successful Scandinavian tour in 1983.

Landslide Records decided it was time to bring back Nappy Brown, R&B legend. After contracts were signed, Nappy went to Atlanta to record during the summer of 1984. The result, Tore Up, was a collection of diverse songs that showed Nappy's incredibly powerful voice to still be in excellent form. The band backing Nappy on Tore Up is none other than the Heartfixers, featuring future guitar star Tinsley Ellis. Brown's voice, a true instrument in its own right, blended so well with the band it's hard to believe that Nappy hadn't recorded for over 14 years.

Since the release of Tore Up, Nappy has recorded a solid string of albums for a variety of labels. And interest in his early recordings remains strong, as many of them have been reissued on CD.

Nappy Brown's final album, Long Time Coming -- recorded in May 2007 -- on Blind Pig Records, was released on September 25th, 2007. Reviews were overwhelmingly positive (4-1/2 stars from Allmusic); the album and Brown were each nominated for a Blues Music Award (the genre's highest honor). The album, produced by Scott Cable, features the guitarists Sean Costello, Bob Margolin, Junior Watson, and other special guests performing Brown's hits and several new songs. In the fall of 2007, Nappy Brown was Living Blues Magazine's September cover artist, and followed that honor with a European tour. Nappy Brown was a musical guest on Garrison Keillor's A Prairie Home Companion, October 20th, 2007.

At the ceremony for the Blues Music Awards in May 2008, Brown gave one last electrifying performance, capping an incredible comeback year.

On June 1, 2008 following a performance at the Crawfish Festival in Augusta, New Jersey, Brown fell ill due to series of ailments and was hospitalized. He died in his sleep on September 20, 2008 at Mercy Hospital in Charlotte, North Carolina.