No One You Know - Calm Before the Storm 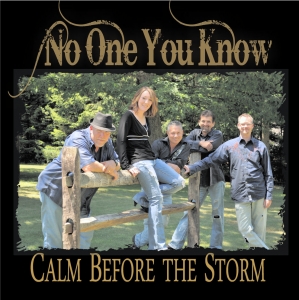 The song, "Just Over the Blue" penned by Don Anderson has been a favorite since the album was originaly released in late August.

No One You Know Earns One of Top Spots at SPBGMA
For Immediate Release - July 26, 2010


Mountain Fever Records Signs No One You Know

July 27, 2010 (Willis, VA): Mountain Fever Records is proud to announce they have signed West Virginia-based bluegrass recording artists, No One You Know and will release the band's CD, Calm Before The Storm on August 31st.


No One You Know is a talented and fresh bluegrass band comprised of five seasoned musicians - Rachel Burge; mandolin and vocals, Don Anderson; bass and vocals, Ramie Bennett; banjo and vocals, Bruce Jones; dobro, and Lance Gainer; guitar and vocals. Each member writes all of the band's original music and collectively wowed audiences at this year's National SPBMGA (Society for the Preservation of Bluegrass Music in America) Convention when they placed second in the International Band Competition.

Calm Before The Storm offers 13 tracks of some of the best bluegrass available today including 11 brand new songs written by the band and new versions of bluegrass classics such as "Ashes of Love" and the Osborne Brothers' "One Tear".

"Looking for A Sign", the first single from the new CD, will be released Tuesday, July 27th via www.AirplayDirect.com. Band member Lance Gainer had this to say about the song:

"'Looking For A Sign' handles the omnipresent topic of relationships but

with a unique twist. Rachel not only penned this gem, but delivers a

superb vocal performance that only accentuates the conflict experienced by the main character. I feel the band achieved a higher level of cohesion where we move as one unit versus five individuals."

No One You Know Earns 2nd spot at SPBGMA
FOR IMMEDIATE RELEASE Feb. 6, 2010

— The rocket ride to the top of bluegrass' best continues for West Virginia band No One You Know, consisting of Don Anderson, Bruce Jones, Ramie Bennett, Lance Gainer and Rachel Burge. The band walked away with the second place prize at Society for the Preservation of Bluegrass Music of America's (SPBGMA) Bluegrass Music Awards and 27th National Competition. The competition started with 20 bands in the first round, and continued with two more elimination rounds. No One You Know placed in the top two positions in all three rounds. The band performed some original songs from their debut album, "She Waits," along with two traditional bluegrass tunes. Two of No One You Know's members, Don Anderson and Bruce Jones, participated in this same competition in its third year, 1986. The competition is now in its 27th year. It's just more proof that N1YK is on the rise after the release of their independent album "She Waits." The album, which has so far sold out its first printing, is available now in our online store.